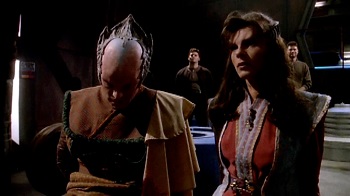 Ceremonies of Light and Dark

In the aftermath of the separation from Earth, the command staff have a number of problems, first and foremost rooting out Night Watch. Their communications are also down to prevent Earth from trying to remotely take control of the station.

As Sheridan begins his rounds, a sniper gets him in his sights. Before he can take the shot, someone else stops him, reasoning that if Sheridan is killed he becomes a martyr, but promises to get their pound of flesh later.

Delenn thanks the Minbari commanders for their help, and decides that the time has come for a ceremony called the Nafak'cha, or rebirth ceremony. Marcus isn't sure anyone will want to come as they have things to do of their own, such as Sheridan overseeing the funerals of those who were killed defending the station. As Ivanova reads the names, the caskets float out of the docking bay toward the local star.

Londo and Refa meet up to discuss reports from the front lines.

Londo: You will note the plural form, "lines". Is there anyone along our border with whom we are not currently at war?
Refa: We need room to expand.
Londo: Only an idiot fights a war on two fronts. Only the heir to the throne of the kingdom of idiots would fight a war on twelve fronts.

Londo wants them to pull back their forces and for Refa to cut his ties to Mr. Morden. Refa is unwilling, until Londo mentions he poisoned Refa's drink. The first part settles into he blood until he has an agent introduce the second part, at which point, Refa will be quite dead. Refa asks why and Londo tells him it's to guarantee Refa's cooperation...and because sooner or later Refa would do the same to Londo.

Londo: As we are returning to the old ways, Refa, and poison was always the instrument of choice in the old republic; being something of a sentimentalist, I got here first.

Londo demands Refa encourage the emperor to call off the attacks on worthless worlds, and bolster the defenses of Centauri Prime, and have nothing more to do with Morden. He ends with a toast to Lord Refa's health.

Sheridan, Ivanova and Garibaldi are in the process of restarting the computer and replacing all the command codes, when Delenn comes in wanting to talk to Sheridan. She tells him of the ceremony, and that they all need to be "reborn" into their new lives, putting their old selves behind them.

The two from earlier, Boggs and Sniper, are meeting with the rest of the Night Watch. They've just gotten orders from home. Their priority is the Minbari. Driving them off will enable Earth forces to come in and retake the station. To do this, they're targeting Delenn.

Delenn finds Marcus in a shady den and tries to convince him to take part in the ceremony, but he's strangely reluctant.

Garibaldi restarts the computer, but when it comes back up it starts talking in a sarcastic, obnoxious tone. Garibaldi remembers that they once tried to install an artificial intelligence, but they shut it down right away. Now they seem to have reactivated it.

Delenn and Lennier meet with Londo and G'Kar to invite them to the rebirth ceremony, but neither are inclined to come. Londo is not interested in the aspects of the ceremony (telling someone a great secret and giving up something of great value), and G'Kar is too busy helping the Narns get adjusted to their new roles. Marcus thinks they should just give it up, but Delenn is determined. Lennier then reminds her that one of the captains is coming aboard and she asks Marcus to come with her to the docking bay.

As they wait Delenn talks to Marcus, and he admits that he can't give anything up because he doesn't have anything left. His brother had joined the Rangers and tried to warn him of the Shadows, but he wouldn't listen. When the shadows came he lost his entire life, then went off to find the Rangers and finish what his brother had started. Delenn tell him that his pain is what he must give up, the guilt at being alive.

As the ship docks, Marcus goes off to let Security know, and Delenn goes to meet the captain, Lennan. As she does, Night Watch ambushes them.

Garibaldi is listening to Sparky (the A.I.) complaining, when Ivanova calls with word of the kidnapping. Delenn and Lennan, along with one of his aides, are being held somewhere in an abandoned area as their captors make contact with Sheridan. They demand the Minbari ships leave within six hours or they'll kill the hostages. To prove their point they kill Lennan's aid. Marcus storms off.

Back in the Downbelow bar, Marcus approaches a group of lowlifes and deals himself into their game. He asks what they know but they aren't inclined to tell him anything, and ask why they should bother.

Delenn and Lennan talk in Minbari, but Sniper understands them and thwarts their attempts to get loose.

Back in the bar, Marcus finishes off the last of the patrons, a bit annoyed that now he has to wait for one to wake up again, when Lennier comes up behind him. He's come to see that the ceremony takes place, which boggles Marcus. Lennier tells him that yes, he does want to take the station apart looking for her and decides now's as good a time as any to tell his secret. "I love her." He explains that it is not a romantic love, but a pure, perfect love. He knows Delenn is intended for another and that he's accepted it.

Just then, one of the patrons begins to stir and Marcus is able to get some information.

In Sheridan's office, analysis of the video has come up with a sound that Garibaldi knows from Gray Sector. It;s a start but they need more specifics. Marcus comes in with what they need to determine where they are. With that Sheridan comes up with a plan. They're going to surrender.

As the deadline approaches, Boggs gets a signal from his mole that the Minbari have pulled out. Before they can celebrate the room rocks and alarms begin blaring. People begin running from a leak in the fusion reactor. Boggs decides to take the hostages and run. As they leave they are ambushed by security and a firefight breaks out. Boggs is killed but Sniper tries to throw a knife at Sheridan and Delenn runs in the way, taking the blade in her back. Enraged, Sheridan chases Sniper down and beats him to the ground.

They find that the knife missed anything vital and she should make a full recovery. Unfortunately, the time to complete the ceremony is almost up. Sheridan decides they will have the ceremony in Medlab with her. Sheridan comes in, gives up the uniform and all it represents, and tells her that she has come to mean more to him than almost anything and he can't imagine his life without her, thus finally openly acknowledging a love story that's been brewing for the last season and a half. One by one, the others come in, lay their uniforms down and tells their secrets.

Garibaldi: No one knows, but I'm afraid all the time of what I might do if I ever let go.
Ivanova: I think I loved Talia.
Franklin: I think I have a problem.

As they leave, Lennier tells them Delenn had something made for them. A short time later, they walk into C&C wearing brand new uniforms.

Sheridan: The crisis, for now, is over. Tell the ships we're open for business.