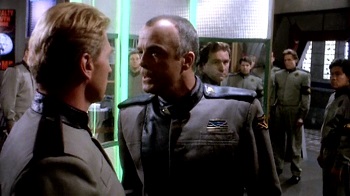 Security is Putting on the Reich, and Da Chief doesn't like it.

Point of No Return

There is always choice. We say there is no choice only to comfort ourselves with the decision we have already made. If you understand that, there's hope. If not...
-Lady Morella
Advertisement:

Londo is driving Vir insane "correcting" his report on the Minbari, when he receives word that Lady Morella, the late emperor's third wife, will be arriving soon, but his good mood is cut short when he finds out that martial law has been declared.

Sheridan is getting an update from Earth, and it's not good. Not only has Clark declared martial law, he's disbanded the senate, with the senators on the run, arrested, or locking themselves in their offices...until the Elite Guard opens fire on the senate building. General Hague is also missing, but he left a message for Sheridan: "Everything's gone to hell, John. God help us all. You're on your own." With that the connection ends.

Sheridan informs the crew on C&C, urging them to remain calm and on duty. He also orders an elevated state of readiness in case any hostile forces try to take advantage of the situation.

Corwin: Captain, how did this happen? What did we do wrong?
Sheridan: I don't know, Lieutenant. I don't know.

Garibaldi comes with more bad news. There is a nine-system alert for General Hague, who is reportedly trying to organize a counterstrike. If they get him, they get the B5 crew as well.

Garibaldi: This is bad.
Sheridan: I've never seen it any worse.

Zack meets with the Nightwatch liaison who tells him about a must-attend meeting. G'Kar is singing in his cell when Garibaldi comes to let him out. G'Kar is surprised; his sentence isn't up yet, but Garibaldi is going to need his people and he doesn't think it matters anymore with everything else going on.

Londo is also lamenting the situation as Lady Morella is arriving. She is a prophetess, and he wants to know if what he sees is going to happen.

Morella comes aboard and introduces herself, a little surprised that the Captain is not there also as befitting her station. Londo explains that Sheridan has a situation he is dealing with, and sees her to her quarters himself.

Sheridan is on the comm with General Smits at Earthdome, who reminds Sheridan that their duty is to respect the chain of command. He then informs Sheridan and Garibaldi that Nightwatch is to assume full authority over security matters. Those in security must either already be in Nightwatch, or join it. Sheridan is not happy, and Garibaldi is borderline furious.

G'Kar is surprised to find Ta'Lon guarding his quarters, taking the opportunity to repay his debt. G'Kar says he may need his help soon.

As security personnel come up and either join the 'Watch or resign, Morella prepares for her tour. She suspects Londo has ulterior motives, and he admits that he wants her to see for him.

Londo: I believe that I have been touched, that I am meant for something greater, a greater darkness or a greater good I can no longer say.

She agrees to help him, and they head out.

Despite Zack's pleading, Garibaldi storms into the security station and delivers a blistering rebuke to his people, but none of them relent, and eventually he is escorted out. Zack watches him go sadly. G'Kar is in his quarters trying to explain to Ta'Lon what he's come to understand. Meanwhile Sheridan looks over the order to impose martial law. He'll make the announcement as soon as he can stomach it.

In the Zocalo, Londo and Vir are showing Morella around when a news report comes on that Earth Force ships have started shooting at each others. The main ship has been identified as the Alexander, which manages to disable her opponents and escape, prompting applause from the audience. Nightwatch shows up and tries to break up the crowd but a riot breaks out as Sheridan makes an announcement and reads the order implementing martial law.

In his office, Sheridan throws the order away, feeling like he needs a shower. They're penned in by Nightwatch, but when Franklin says they can't fight the chain of command, Sheridan realizes something. He replays the message from General Smits, specifically the part where the order giving Nightwatch authority came from the political office.

G'Kar comes to C&C with an idea. Shortly after, Zack is surprised to find Garibaldi, Ivanova and G'Kar waiting for him in his quarters, with Sheridan appearing behind him.

In Londo's quarters, Lady Morella is tending to Vir, who was hurt in the riot. As she has a chance contact with Londo, she sees Londo as an old man, an emperor.

Zack comes into the security office and tells them that Sheridan is planning to replace the Nightwatch personnel with Narns. The Nightwatch officer is eager to intercept them and arrest Sheridan and the others for sedition

G'Kar speaks to the local Narns and asks them for a favor.

Sheridan meets with the others while Nightwatch prepares to arrest them, but when they get there Zack runs out as the doors to the docking bay are sealed. He meets with Sheridan outside and tears off his armband.

Zack: They're all yours, Captain.

Sheridan activates the PA, and explains that he's arresting them for mutiny for following an illegal order. The order originated in the Political Office, a civilian organization with no authority over the military. He explains that valid orders come from the president through the Joint Chiefs. He has sent for clarification, but due to communication troubles, that may take a while. If they want to leave, they will leave their link, identicard, and weapon and then be confined to quarters.

Ivanova points out that this is a temporary measure. Once Clark hears of it, he'll issue the order personally. Sheridan is hopeful they can resolve this before it gets to that point. And as for the sudden lack of security personnel, G'Kar shows up with a whole crew of Narns in tow.

Franklin: Oh, boy, Londo is going to love this!

In Londo's quarters, Morella begins explaining what she sees to him, that he will have three chances to avoid the fire that awaits him.

Morella: You must save the eye that cannot see, you must not kill the one who is already dead, and at the last, you must surrender yourself to you greatest fear, knowing it will destroy you.

Londo doesn't understand, but Morella just encourages him to watch for them. She concludes by telling him that he will be emperor, then turn to Vir and says he will also be emperor. Vir thinks she's joking, but she's quite serious, one of them will be emperor, after the other is dead.

As the Nightwatch file out of the docking bay, Sheridan expresses his appreciation to G'Kar, and tells him if there's anything he wants, and there is. G'Kar wants in. He's noticed the secret meetings and wants in on it. Sheridan explains he'll have to talk it over with the others, but agrees to bring it up.

Later, Ivanova finds him in his office with news that Delenn is back, and Gen. Hague is on the run.

Sheridan: They'll be coming for us next, you know.
Ivanova: I know. Never though it would end like this.
Sheridan: Me either.