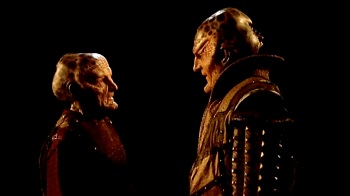 We are fighting to save one another, we must realize we are not alone. We rise and fall together. And some of us must be sacrificed if all are to be saved. Because, if we fail in this, then none of us will be saved...and the Narn will be only a memory.
-Image of G'Kar's father (really Kosh)

There is fallout from the release of the President's recording, and Nightwatch isn't happy about it. One of them is trying to arrest a shop owner for posting "seditious" materials, but Sheridan shuts him down. This is apparently not the first time Nightwatch has done this and Sheridan warns that if it happens again there will be consequences. Meanwhile, Garibaldi informs Ivanova that her favorite person in the universe, Mr. Bester is on the line and will be arriving on station shortly, while a crazed man tears through Downbelow, screaming about a mountain falling on him.

The War Council meets and discusses what to do about Bester. They don't want him in their heads, and don't feel they can trust him with the rules not to scan them. Garibaldi and Ivanova don't mind killing (ok, wounding) him, but Sheridan doesn't go for it. Delenn then says she has an idea.

Later, Franklin is in Medlab with the crazed man from earlier when a woman is brought in. At first it doesn't seem connected but as it turns out she's a climber and was nearly killed in a rockslide some time ago. In other words, a mountain fell on her. Franklin groans and orders the first patient checked for traces of dust, the dangerous drug that temporarily grants the user telepathic abilities, but is highly addictive and...well, you saw what the guy did under its influence.

As Bester's ship approaches the station, Ivanova orders the crew out and then activates the defense grid, intending to blast him out of the sky, and effectively end her career, but Sheridan stops her. He assures her that Delenn's plan will work, and convinces her to stand down. Minutes later, an irritated Psi Cop is shown in to Sheridan's office where he is confronted by a group of Minbari telepaths who are shielding the minds of the command crew. When Bester asks why, ("Polite or straight up?"), Sheridan proceeds to outline everything he doesn't like about him, and holds him personally responsible for what happened to Talia. Bester protests that that particular project began under his predecessors, but he takes the opportunity to try and rile up emotions to break the mental shields. They refuse to talk any further unless he takes a sleeper to suppress his telepathic ability. Otherwise, all their business will have to be done with four Minbari telepaths hovering over their shoulders. Bester agrees to the sleepers, administered by Franklin, and leaves until the drug takes effect.

Bester: We're here to save your butts. Next time show a little gratitude.
Franklin: On second thought, maybe wounding him isn't such a bad idea after all.

Delenn was in a tense meeting of her own, trying to mediate between the Centauri and Drazi. Londo insists on having a "buffer zone" that seems to grow larger every time it comes up. He leaves and the Drazi do as well. Vir, who is back on station for a while, thanks Delenn for helping get his current position on Minbar, which he has really warmed up to. He wants to have Londo come visit, thinking it would do him good, but the Minbari disagree. A darkness of the heart cannot be removed by moving the body, but Vir won't give up hope.

With the sleepers now in effect, Bester briefs the crew of his mission: to find and put a stop to the trafficking of Dust. Psi Corps believes the distributor is trying to break into alien markets, which is proven correct as the man, Lindstrom, is concluding a deal with G'Kar. Garibaldi and Bester begin searching, as G'Kar takes the Dust and then goes searching for his prey, "Mollari!"

In an interrogation room, Garibaldi is trying to get information out of Ashi, one of the underworld leader on the station. He's being tight-lipped, but Bester blurts out that he lying, which sparks a protest, but it can't be unsaid and Garibaldi gets him to spill information that a man named Morgenstern has quarters in Red Sector and a shipment coming through that day. Garibaldi has him sent out then demands to know how Bester knew he was lying. Bester just figured he was lying about something, and coupled with the badge and uniform, gave him an outlet.

In Londo's quarters, he is trying to show Vir how intelligence has nothing to do with politics and basically re-writing Vir's report on the Minbari, much to Vir's annoyance, when G'Kar comes in.

Bester and Garibaldi wait at the indicated location for Lindstrom and the shipment and manage to apprehend him and seize the drugs.

G'Kar drags Londo off and begins delving into his mind, learning that Londo was assigned to Babylon 5 simply because there was no one else willing to go, a joke assignment, which G'Kar finds very amusing but he's there for meatier matters. Next he finds Londo's memories of meeting with Morden, learning that he was the one who arranged for the destruction of the Narn base in Quadrant 37. G'Kar demands to know who Morden and his associates are, but Londo doesn't really know himself, and G'Kar begins tearing though him mind to find out what he does know.

A flurry of images later he finds himself on Narn facing his dying father. He is then faced with a separate vision of his father, who urges him to put aside this Cycle of Hatred and begin building something better. G'Kar protests that he's honoring his father's name, but the other Narn asks if he truly is, and to rethink that. He warns that if the Narn and Centauri war continues, there will be no one left, and it won't matter who's to blame. He says that G'Kar has the chance to become something greater, and nobler, a chance the universe rarely offers. As the vision closes, G'Kar sees the angelic form of G'Lan flying off.

He awakes next to an unconscious Londo and begins sobbing, not noticing Kosh in the shadows, who turns and glides away.

Later, facing the Ombuds, G'Kar pleads guilty and while Sheridan tries to speak up for him, he is sentenced to sixty days confinement. Garibaldi tries to give him back the Book of G'Quon, but G'Kar tells him to keep it for now.

In Medlab, Londo is recovering while Vir, about to leave the station, come to see him. Londo tells him to never let anyone make of joke out of him.

Garibaldi sees Bester to the docking bay, where he's met by another Psi Cop. It turns out Psi Corps had actually created Dust to try and create new telepaths, but it hasn't been successful yet. Bester was against it from the start, but at least it's out of alien hands.

Sitting in his cell, G'Kar ponders what he saw.