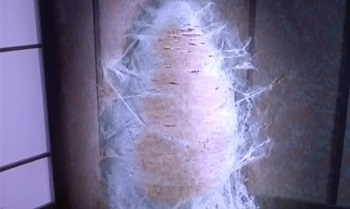 The President's dead, Garibaldi's in a coma, and Delenn's inside this. Happy New Year.

Yes. I think he's ready. He's perfect for our needs. No. No. He suspects nothing. And when the time is right, Ambassador Mollari will do exactly as we wish. Destiny is on our side.
— Morden
Advertisement:

Dec 30, 2258:As the new year approaches the Narn and Centauri are locking horns... again. This time it's over Quadrant 37 where there is a Narn military outpost. The Centauri have been sending ships into the area which is what the current argument is about. After shouting and threats, G'Kar storms out.

On ISN a story is running about President Santiago's goodwill tour of the colonies, and mentioning an anticipated speech from the transfer point on Io. Jeffrey and Catherine are watching in his quarters, when she asks if he has plans for new years. He says no, unless the current crisis still isn't resolved, and she tells him she has a surprise in store. She's not the only one, as Jeff gets up and begins talking about their relationship, their comings and goings, how they feel... then he blurts out, "Do you want to get married or don't you?" She responds with a definite yes. Commence snogging.

In Londo's quarters, he is wondering how many gods he's offended to find himself here. Vir suggests all of them. Londo sighs and readies himself for the humiliation of going back to the council and giving Quadrant 37 to the Narns. Just then a call comes in. Vir answers and is about to arrange a call back, but Londo recognizes the voice and decides to take it personally.

On the screen, Mr. Morden requests a meeting in the park in one hour. After his last favor, getting the Eye back and most likely saving Londo's career, Londo is happy to oblige.

Delenn is in her quarters putting the finishing touches on something she's been working on all year. Lennier has just returned from asking Ambassador Kosh a question. The answer was one word: "Yes." Delenn looks disturbed and leaves in a hurry.

Garibaldi is trying to find answers in Downbelow, but none of the locals want to cooperate... except one. A short man tells how he and Petrov were brought on to help load cargo for a man named Devereaux. Apparently Petrov found something that scared him half to death right before he went looking for Garibaldi.

Londo and Morden meet in the park. Morden has come offering his help; he knows about the situation in Quadrant 37 and offers to take care of it. He tells Londo to go back to his quarters and tell his superiors he will take care of it. Londo is incredulous. "They'll think I'm insane, or drunk." Morden manages to convince him, and when Londo asks about a price he is told there is none, but they may ask for a favor in the future.

Delenn has gone to see Kosh. She seems troubled about something, and is looking for reassurance. She wants to see for herself. In response, Kosh opens his encounter suit and lets her see inside. She bows and says she will fulfill her promise.

Garibaldi finds Devereaux and manages to force him to come with him. Devereaux tells him he's making a mistake, and that this is too big for him.

Londo returns to his quarters and tells Vir to contact Centauri Prime and tell them that he will personally take care of Quadrant 37. Vir isn't quite sure he heard right and asks if Londo's drunk. Londo replies that he is quite sober, and tells Vir to make the call. He then pours himself a drink, but as Vir contacts the homeworld he pauses, then pours it back into the bottle.

Sinclair comes to see G'Kar about giving the Centauri room to maneuver. G'Kar is disinclined, but Sinclair feels they're at a crossroads and might be taking the wrong path. He urges G'Kar to reconsider for the Narns as well as the Centauri.

That evening, Jeff and Catherine have invited Susan and Michael to dinner at the Fresh Air Restaurant. They announce their engagement and ask Michael and Susan to be Best Man and Maid of Honor respectively. They are interrupted by Michael's communicator. It's security, and Devereaux is missing. He then tells the others about Devereaux's weapon, which had no serial number, meaning he's an Earthforce special agent which means something big's going on.

In Quadrant 37, a Narn fighter is on patrol when the space in front of him seems to shimmer. For a second it seems like a trick of the light when a nearly pitch-black ship fires at him, destroying the fighter in one shot. Several more ships appear, their silhouettes against the planet reveling a spiky, spider-like shape, as they completely destroy the outpost. As soon as they finish, they vanish again.

Back on station, a news report is running that Vice President Clark has left Earth Force One, apparently suffering from a viral infection.

Garibaldi has had some luck; one of the ships Petrov was loading has been delayed, and he and his second, Jack, take the opportunity to inspect the cargo. The manifest says it's supposed to be medical supplies, but they find transmitters set to send out static which are set to Gold Channel's frequency, and triangulation devices which are set to the coordinates of the transfer point on Io. Realizing what this means, he calls Sinclair with urgent priority and arranges to meet him in his office in twenty minutes. He leaves Jack to watch the evidence, then hurries off. Jack then makes a call of his own. Moments later, Garibaldi is confronted by Devereaux and two cohorts. He is about to apprehend them, but he is shot In the Back... by Jack.

Later, Sinclair is in his quarters. Garibaldi is long overdue, and knowing he wouldn't make a call like that without following up, they figure something is wrong. Before he can continue his search, Delenn visits. She holds up the triangular device she got from the Grey Council, the triluminary, which Sinclair recalls seeing aboard the Minbari cruiser. She presses him about what he remembers from the Battle of the Line, and he admits to remembering some, but not all. She asks him to come to her quarters, where she will explain as much as she can. He needs to find Garibaldi first, who at that time is crawling toward the transport tube.

Na'Toth bursts into G'Kar's quarters with dire news: their entire outpost at Quadrant 37 has been destroyed. As she laments their loss, G'Kar begins ticking off who could be responsible; not the humans, the Centauri lack the will, the Minbari wouldn't do it, the Vorlons don't care, and none of the other races could manage it. He comes to a dark conclusion:

There's someone else out there, Na'Toth.

There are parties across the station as 2258 rolls into 2259, and a young couple heads toward the lift. As the doors open, however, the woman screams. Garibaldi is inside lying in a pool of his own blood.

Delenn is nearly finished, and despite Lennier's worries places the triluminary atop the device. It glows softly and appears to produce strands of some kind which gather in one part of her room.

Garibaldi is rushed to Medlab for surgery. He wakes up long enough to tell Sinclair that they're going to kill the president at Io. "Warn him! Warn him..." He loses consciousness and Sinclair rushes to C&C. Ivanova tells him that all channels, even Gold Channels, are being jammed. Re-routing to Earth Central doesn't work either. On ISN Earth Force One is shown floating in space when it suddenly explodes. They failed. The president is dead.

Back in Medlab, Sinclair orders guards posted around Garibaldi and medical staff on hand 24-7. He also orders any information on Devereaux tracked down.

Ivanova is seated in the station's core shuttle where she is joined by G'Kar and Na'Toth. They offer their condolences over the loss of the president and asks her to tell Sinclair there is little point in discussing Quadrant 37 further. They have no leads but are determined to find whoever was responsible. G'Kar wishes Ivanova, and by extension all humans, well in their own search for justice.

One of the ones responsible for Quadrant 37 is meeting with the other one responsible. Londo is in a near panic; apparently the death of 10,000 Narns was not what he had in mind. Morden dismisses his concerns and points out that he's a hero to his people now. He rid them of a problem without having to humiliate themselves in the process. They've noticed him, which was the whole point.

Sinclair calls Earth Central but is given the run-around by a senator who dismisses his claims of assassination and orders him to keep quiet about it to avoid starting a panic. Elsewhere, some security officers find Jack standing over the bodies of Devereaux and his men. He claims self defense, but Devereaux's weapon is cold, suggesting it hadn't been fired. Jack asks what their point is, and the others decide to drop it.

Sinclair is at the bar watching as Vice President Clark is sworn in as president. President Clark then address the people promising to focus on the needs of their own people to prepare for the tasks ahead. Sinclair suddenly becomes aware of Kosh standing behind him. The Vorlon bows, then says, "And so, it begins. You have forgotten something." Realizing what he means, Sinclair rushes to Delenn's quarters.

He finds Lennier staring at a faintly glowing object, a chrysalis, with Delenn inside, changing. When Sinclair asks what she's changing into, Lennier responds, "I don't know."

Na'Toth is also too late, as when she comes to G'Kar's quarters she finds only a recording of him explaining that he has suspicions about the attack and is going to investigate them. He also tells her to tell Sinclair that he was right, they were at a crossroads and there is no going back now.

Meanwhile Morden is in a white room speaking to creatures that speak with strange chirp/whistling sounds. He tells them that Londo suspects nothing and that he will do exactly as they wish.

Catherine finds Jeff brooding on the couch, and sits down, putting her arms around him. He simply stares into space and says, "Nothing's the same anymore."