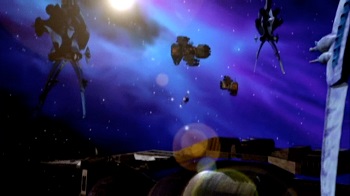 The war for independence.

That's what makes this war different from anything we have ever gone through before. This time we know everyone we kill.
-Major Ed Ryan
Advertisement:

A fan favorite episode and winner of the Hugo Award for Best Dramatic Presentation, 1997.

Londo is making his way through customs, complaining about the mess everything is in, and particularly about the Narns the station's brought on as extra security, which the Narn checking identicards doesn't much care for and makes the ambassador wait for a couple hours due to a "computer error."

Londo: Madness! Total and complete madness! This never would have happened if the humans had not started fighting with one another!

The Alexander is in one of those fights right now, with the cruiser Clarkestown in pursuit, and firing a shot that strikes the Alexander amidships. On the bridge, the man in command, Major Ryan, reluctantly authorizes opening fire on the other ship, and the Alexander easily destroys the Clarkestown. Ryan comments on how he met the Clarkestown's CO before — General Hague introduced them — and how this war is different, for now they know everyone they kill. He comments that he'll have to find something to say to both their wives... but for now, the Alexander needs repairs, and there is only one safe port for them: Babylon 5.

This is bad news for the B5 command staff; as soon as the Alexander arrives, their involvement with the anti-Clark movement is going to have to come out. Sheridan has Garibaldi put a kill switch in the comm system so no one can alert anyone as to the Alexander's location, except for one line for them and ISN, their link to home.

Meanwhile, Delenn and Lennier bring Dr. Franklin to a wounded Ranger in the docking bay. They need to get him past security, but they don't know which of the Narns they can trust, but G'Kar, who suddenly appears, does and offer to help.

ISN is running a story on the Mars government refusing to implement the martial law order when the Alexander arrives. The comms are cut, and Sheridan makes an announcement to the C&C crew, taking full responsibility for this course of action, and allows anyone who wishes to leave to do so. No one does.

In Medlab, the Ranger explains that many of the League of Non-Aligned worlds have allied with the Shadows and are making war with each other, and the Grey Council has decided not to intervene.

Major Ryan meets with Sheridan and gives them a rundown of the situation, and it's not good. General Hague is dead, killed in the fight with the Clarkestown, and public opinion is actually in favor of martial law, since it actually seems to be a benefit, and ISN can't say too much or they'll be shut down. The only hope is Mars' refusal of the order. Sheridan doesn't think Clark will be able to do much about it, but soon after a message comes that Earthforce is bombing Mars.

Angry at their indifference, Delenn leaves the station to confront the Grey Council and make them see reason. As she leaves, another ship, the Churchill, arrives. Its CO, Captain Hiroshi, wants to speak with the command staff in person.

The ISN anchor is reporting on the Mars attacks, saying there's been no response from the outer colonies, but another reporter interrupts with information that several of them have broken away, and shock troops are actually moving in on ISN itself. Gunfire is heard, explosions rock the studio and then the feed is abruptly cut.

Hiroshi's news is that Clark is sending his forces to seize direct control of the outer colonies, including Babylon 5. She and Ryan leave, and Sheridan asks Ivanova, Garibaldi and Franklin if they surrender or fight.

In hyperspace, a massive fleet heads toward battle.

Sheridan gives orders for the station to ready for battle, then goes to make a call. Delenn arrives on the Council's cruiser and forces her way in to see them. She delivers a blistering recount of their faults and inaction, accusing them of being lost in their pride, and no longer believing the prophecies that had lead them for a thousand years. She siezes the leader's staff, and breaks it, and the Council. She then calls those who will to follow her as she storms out, five of the hooded figures following after her.

Back on the station, Sheridan makes a call to his father, since he doesn't know when he'll be able to again. The elder Sheridan reminds him of the first lesson he taught him, "Never start a fight, but always finish it."

In C&C, Sheridan makes an announcement via Draal's holographic projections:

In the last few hours we have learned that warships are coming this way from Earth. Their orders are to seize command of Babylon 5 by force. As commanding officer and military governor of Babylon 5, I cannot allow this to happen. President Clark has violated the Earth Alliance constitution by dissolving the Senate, declaring martial law, and personally ordering the bombing of civilian targets on the Mars Colony. He is personally responsible for the deaths of hundreds of innocent people! Following these attacks, Orion 7 and Proxima III have broken away from the Earth Alliance and declared independence. Babylon 5 now joins with them. As of this moment Babylon 5 is seceding from the Earth Alliance. We will remain an independent state until President Clark is removed from office. At the end of this current crisis, anyone who wishes to leave for Earth is free to do so. Meanwhile, for you own safety I urge everyone to stay in your quarters until this is over. That is all.

With that, they make final preparations and wait for the attack, which comes moments later as the attack force comes through the jumpgate and the lead ship, the Agrippa, orders them to surrender. The Alexander, Churchill, and station launch fighters, while Sheridan tries to talk them down, but the loyalist forces commence their attack.

Fighting is fierce and losses are heavy on both sides. Garibaldi goes to repel a boarding crew, but the Narns rush ahead of him and get caught in a killing zone. The Churchill takes catastrophic damage and rams an enemy destroyer, destroying both ships. Ivanova collides with another fighter and is forced to eject, while the boarding action has devolved into a giant brawl in close quarters. Finally the last enemy ship is destroyed, but almost immediately a new wave arrives. Then a set of jump points form right next to the station, but it's three Minbari warcruisers, and the White Star. Delenn declares that Babylon 5 is under her protection, and when the loyalists try to protest, she practically dares them to try something, going as far as to remind them that Babylon 5 is commanded by the only Earthforce captain who managed to defeat a Minbari fleet. The attack fleet leaves rather than engage Minbari ships.

Afterwards, Ryan and Sheridan are discussing their situation, specifically, their pilots. Sheridan says that about thirty percent of the station's fighters were damaged or destroyed in the battle and it's not likely they'll be getting replacements anytime soon. Ryan states that the surviving Churchill fighters are homeless, and Ryan suggests Sheridan to take them on and bring the station's fighter complement up to full strength. Sheridan said that while he didn't know Captain Hiroshi very well, he would be honored to give her pilots a new home. Ryan, meanwhile, is going to leave, to split Earthforce's attention, and to look for any other rebel ships. Sheridan goes to meet with Delenn, finding Garibaldi seeing the Nightwatch members off station, the ones they know about, at least. They'll have to be on guard for sabotage for a while.

Delenn arrives and Sheridan expresses his gratitude, then Ivanova comes and takes them to see something. A large crowd is gathered in the Zocalo who begin applauding as Sheridan and the others appear.

"Severed Dreams". After declaring independence from EarthGov in the wake of President Clark's coup d'etat, Babylon 5 and its allies have barely defeated two EarthForce destroyers sent to capture the station, when three more ships arrive. At that moment, Delenn arrives with a flotilla of far superior Minbari Sharlin-class War Cruisers, and issues the warning, "Only one human captain has ever survived battle with a Minbari fleet. He is behind me. You are in front of me. If you value your lives, be somewhere else." The attackers promptly retreat.

Example of:
The Cavalry

"Severed Dreams". After declaring independence from EarthGov in the wake of President Clark's coup d'etat, Babylon 5 and its allies have barely defeated two EarthForce destroyers sent to capture the station, when three more ships arrive. At that moment, Delenn arrives with a flotilla of far superior Minbari Sharlin-class War Cruisers, and issues the warning, "Only one human captain has ever survived battle with a Minbari fleet. He is behind me. You are in front of me. If you value your lives, be somewhere else." The attackers promptly retreat.