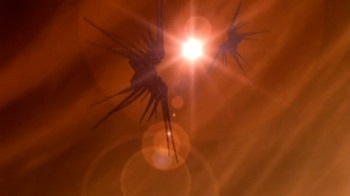 From beneath the sands of Mars.

Then we heard it...A sound that just reaches right into your brain and rips it apart...The sound of something terrible being born.
-Dr. Mary Kirkish
Advertisement:

Marcus has been busy this morning. In addition to getting Ivanova fresh eggs and bacon for breakfast, much to Sheridan and Garibaldi’s jealous astonishment, he’s escorting a woman through Downbelow as armed thugs try to kill them. He manages to drive them off and get her to safety.

ISN is running a story about the evidence piling up against Clark, mentioning that officials have noted that "extreme measures" may be necessary.

G'Kar is in his cell when Garibaldi comes to see how he's doing, noting that he seems happier in jail than he did out there. G'Kar replies that in here there is nothing to distract you from yourself and he has been pondering and writing his musings down in a book. Garibaldi then gets a call for Code 7-R.

Garibaldi introduces the woman from earlier to the War Council. Her name is Dr. Mary Kirkish, formerly of Interplanetary Expeditions, and, as Garibaldi explains, she has vital information that they need to hear. She begins telling her story, how she was part of an excavation of an unknown object buried beneath the surface of Mars, which turned out to be a Shadow vessel.

Sheridan says EarthGov keeps saying they’ve never seen them before, but Kirkish tells him they’re lying. The council briefly debates their motives, Delenn thinking they aren’t trying to find out more about them as much as finding who else knows about them. Franklin is skeptical of that based on one ship.

Franklin: There was just one ship wasn’t there?
Kirkish: That was just the start…it gets worse.

She explains that there are few left who know what really happened, the rest are either dead or disappeared. Eventually they’ll find her as well, but she wants the truth out before that happens.

Her team was pulled back, and a stream of unmarked shuttles descended on the site, until finally another Shadow vessel came. It digs up the other ship, and then lands near it. Then, with a terrifying sound, they both emerge and fly off. Kirkish explains that afterwards she and her team were warned that if they talked about it there would be “unfortunate” consequences, and then they were split up.

Sheridan turns to Garibaldi, who explains that he saw part of what she described, but when he went back to check it out, there was nothing there…except a scorched Psi Corps badge. Kirkish then continues, explaining that they’ve found another one, this one on Ganymede. This time they’re going to try to fly it back to Earth to study it, to learn to use it against the other races, and perhaps the people of Earth. That’s when she decided to get out.

With her message delivered, Kirkish resigns herself to her fate, but Delenn has made arrangements for her to take refuge in Minbari space. As she leaves, the council stares at each other.

Franklin: If Earth and Psi Corps are really working with the Shadows, this is too big. How can we fight something like that?

Sheridan needs to think alone for a while and dismisses the others, except for Delenn. After some time, he comes to the conclusion that they cannot allow Clark to possess a Shadow vessel. So he and Delenn will take the White Star to Ganymede and destroy it. The others are not happy, but there is no choice, and no changing Sheridan’s mind. He gives them orders in case he doesn't return, and then he and Delenn head off to rendezvous with the White Star.

While he’s gone, the Nightwatch have a meeting, in which they are informed that everything that’s been happening lately are all efforts to weaken Earth in a prelude to invasion. The arrest of traitors will begin within the next two months. They will also begin monitoring correspondence, acquaintances, anything that strikes them as suspicious, something Zack is a little disturbed by.

Sheridan is falling asleep in the command chair when Lennier persuades him to go lie down. The tilted beds are a bit off-putting, but Delenn is there and helps him get some rest, while Sheridan shares an anecdote from when he was a kid.

Back on station, Marcus is trying to brief Ivanova, who's barely paying attention, on Shadow activity around Centauri space...as well as that pesky dragon that eats the sun every thirty days, his flaming nose, and the live badgers in his trousers. Ivanova just glares at him.

Ivanova finally begins venting her frustrations on him, which he takes in stride, noting that nothing neither of them would have been able to change Sheridan's mind, so there's no point in her blaming Marcus for him leaving, so why do it? Because they shouldn't have to do this, because she's mad that she can't be there with him, she doesn't know where she fits in anymore...

Ivanova: And dammit, because I don't have anybody else to blame!

She notes they should be there by now.

As the White Star jumps in, they overhear a transmission of IPX attempting to put a pilot into the vessel, but since the pilot was not prepared, the ship goes haywire and begins rampaging through the facility. Sheridan orders the White Star to full speed. They need to stop it before anyone else gets there.

They can’t destroy it, but Sheridan just gets it mad to get it to follow them…into the Jovian atmosphere, hoping that it won’t be functional enough to escape. Just as the hull is about to collapse from the pressure, they turn around, and the Shadow ship flies past and is crushed in the gas giant’s pressure.

They don’t have time to relax when they begin taking fire again, this time from the Agamemnon, Sheridan's old command. Sheridan won’t fire on her, but they don’t have a way to escape. Rather than fight or surrender, Delenn hits on the idea of opening a jump point in the atmosphere. The vortex ignites the surrounding hydrogen, causing a large explosion, making it seem they were destroyed. Having eluded pursuit, they head for home.

Back on the station, ISN runs a report on an unidentified alien ship that attacked a research facility before being destroyed by the Agamemnon. The anchor mentions President Clark is considering a new plan. Sheridan is not happy, but as Garibaldi points out, they got away with it…so far.

He might have spoken too soon, as the Nightwatch chief talks to Zack. He realized something was up during Sheridan’s absence and want Zack to try and find out what’s going on. Zack refuses, but he’s still wary about everything that’s going on.

Since Ivanova has been confused about where she fits in these days, Marcus puts together a little chart showing where she belongs, along with him, the captain, Marcus' parents (they don't really have anything to do with it, but it's a nice photo). Once Ivanova starts laughing, Marcus declares his work is done, but Sheridan calls and tells them to turn on ISN. The anchor is running a report that President Clark has declared martial law, in response to threats to planetary security.

Anchor: We repeat, Earth is now under martial law.

This episode contains example of: