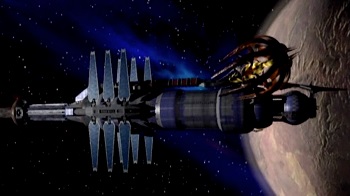 An alien probe shows up promising the answers to everything.

A Day in the Strife

Ivanova: If I live through this job without completely losing my mind, it will be a miracle of Biblical proportions.
Lt. Corwin: Well, there goes my faith in the Almighty.

Sheridan and Ivanova are in a meeting with the transport association, which is not going well, while a pair of Narns arrive on station. One of them introduces himself as Counselor Na'Far, and says he is here to replace Citizen G'Kar. The Centauri have gotten wind of G'Kar's effort to organize a resistance, and they are not happy about it. Na'Far is here to put stop to it. Sheridan refuses to help, and tells him to try and convince G'Kar on his own. Na'Far then reports to Londo, getting an update on the situation on the Narn homeworld, if the Narns are cooperating, and the executions are continuing. Vir asks Londo if it's all necessary, but Londo just says if they don't break their spirit the Narns will just pose a problem later.

In C&C, Corwin informs Sheridan of a probe of unknown origin entering their space. It's broadcasting a signal that will take some time to decode.

Londo goes to see Delenn, to cash in on a favor she owes him. He wants Vir away from here, out of harm's way, and he thinks Minbar would be a good place. She agrees to try and secure a position for him as Centauri ambassador to Minbar.

Garibaldi is having Franklin over for dinner and begins asking him about how he's getting through the day working so many shifts. Franklin admits to having used a stim earlier and promises to cut back on his use of them.

In the Zocalo, Na'Far's body guard, Ta'Lon meets up with Sheridan. They first met when they escaped the Streibs last year, and Ta'Lon feels he owes Sheridan a debt. Though not comfortable with it, Sheridan agrees to Ta'Lon's offer.

The computer finishes analyzing the probe's signal. It's asking questions about numerous technical and theoretical fields. If it gets the right answers, it promises highly advanced technology, but if it does not, it will vaporize the station with a 50,000 megaton explosion. Not really seeing an alternative, Sheridan has them call Earth to get the required information.

Na'Far tries to convince G'Kar to return to Narn, but G'Kar won't have any of it. The Narns on the homeworld are starving, and there won't be food as long as the resistance is operating. G'Kar refuses to submit, saying the Centauri are only trying to control them, and the Narns on the station won't accept someone they see as a collaborator.

When Vir finds out about his new position, he protest that he doesn't want to go, and that Londo will be alone if he does. Londo tells him, "I have always been alone."

The local Narns confront Na'Far, and nearly start a fight, but G'Kar appears and, feeling it the only way to prevent conflict among themselves, agree to return to Narn.

Sheridan is trying to compile the answers he needs, while putting off the transport association, Garibaldi tries to convince G'Kar not to go, and Franklin threatens a doctor on Earth when she can't get the answers he needs fast enough and goes and takes a stim.

They finally get the answers ready, but Sheridan has been thinking; why would a highly advanced race offer them new technologies, and moreover why threaten to destroy them if they don't give the correct answers? What if this is a trick, a ploy to identify races that are advanced enough to pose a threat and eliminate them? As time ticks down, Sheridan tells them not to transmit. Time expires and the probe begins to move off. Sheridan doesn't let it get too far before having a securebot follow it out then transmit the answers once it's out of range. Sure enough, the probe goes boom, destroying the securebot but leaving the station intact. With the threat eliminated, and never going to bother anyone else again, Sheridan is disappointed because now he has to go to that stupid meeting with the transport association.

As G'Kar prepares to leave, the free Narns make one last attempt and Ta'Lon approaches and draws his sword. He has been convinced to join them and reminds G'Kar that they all knew the risks when they began. G'Kar is convinced to stay.

Garibaldi and Franklin are in Earhart's talking about what happened, Franklin assuring him that the stims are under control, while Vir meekly boards his transport to Minbar and Sheridan watches, bored, as Ivanova tries to calm the rabid meeting.

Just another day on Babylon 5.