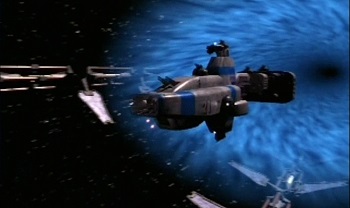 A Voice in the Wilderness, Pt. 2

So, if we go down there, it blows. If we don't it blows anyway, just a little later. It's a good thing I'm Russian; we're used to hopeless situations.
-Lt. Cmdr. Susan Ivanova
Advertisement:

The planet below them was having earthquakes and...la-di-da-di-da-di-da...and Garibaldi goes, "What the hell?" as something big comes through the jumpgate.

The something big turns out to be the EAS Hyperion, a heavy cruiser under the command of Captain Ellis Pierce, who says he's been ordered to take control of the situation.

Sinclair has gotten the alien, who's name is Varn, to Medlab and goes to meet Pierce. The captain explains that the Hyperion was in hyperspace when they received orders to divert to Babylon 5. They are to make sure that Earth gets first dibs on any technology that can be gleaned from the machine. Sinclair demands to know who authorized it, then says that the presence of a heavy cruiser has already stirred things up. No one really knew anything was happening, but they're sure to start asking now.

At a bar, Garibaldi is watching the news with dismay while a group of drunks is watching it like it were a game show. Eventual Garibaldi has enough of their callous attitude and forcefully shuts them up before stalking off.

Sinclair calls Senator Hidoshi explaining that he was promised personally by the president that he would have jurisdiction over this sector of space. The senator says he'll try to get the president, but the Mars situation is taking a great deal of his attention. When Sinclair gets up to C&C he is informed that the Hyperion launched an attempt to land on the planet, but the machine's defenses are getting more aggressive. Sinclair calls Pierce and demands he stop, throwing a story about needing a jamming device to get past them, and that Pierce can't use it as it's being repaired. The Hyperion pulls its fighters back. Sinclair hopes the jammer story will hold them back for a while. In the meantime, the news from the planet is still getting worse. Seismic activity is increasing and seems to be artificially induced. Ivanova estimates they have about 48 hours, but even if they called in every ship in the sector it would take at least three days to fully evacuate the station.

Later, Sinclair finds Garibaldi and asks about the bar incident. Michael vents his frustrations, there are all these things going on, from the fighting on Mars to the planet about to blow up, neither of which he can do anything about. When Jeff asks why he never called Lise, Michael explains he was afraid, afraid to find out she hated him. Jeff mentions that there are a few people who owe him favors, and that he intends to collect.

Draal is with Delenn, when he suddenly hears Varn's voice, which leads him to Medlab. Dr. Franklin tries to shoo them away, but Varn awakes and calls to them, and explains that the planet will explode without a heart, meaning someone in Varn's place.

Sinclair heads up to C&C to find that Pierce has figured out that the jamming device was a ruse and is preparing to send another expedition. Sincair warns him that they have received confirmation that the machine will self-destruct if they approach, but Pierce brushes it off as Varn trying to protect whats down there. Sinclair is not willing to take the chance and threatens to shoot down Pierce's ships if they attempt a landing. Pierce eventually backs down.

Sinclair has no time to breathe as another ship comes through the jumpgate. It's commander, Takarn, apparently of the same race as Varn, claims the machine as his own, that he and his people have been looking for it for 500 years, and gives an ultimatum of ten hours for them to leave, but Pierce calls back and gives them nine hours to withdraw.

In Medlab, Sinclair asks Varn about them, and is told they are outcasts and that the machine is not for them. Later he asks Delenn and Draal if he said anything and they tell him no more than Sinclair was told. They leave and begin to discuss what Varn meant by another, when they are met by Londo, who wants to talk.

Pierce demands to know where Sinclair has been, as he wants to know that Babylon 5 is committed to the coming fight. Sinclair is reluctant, but gives his assurance. When the fighting starts, Babylon 5 will commit its forces.

Londo talks with Delenn and Draal. All of them have had Varn appear to them, and they all know what needs to be done. Londo volunteers to fly them, and expresses the understanding that one of them will not be returning. Later Ivanova is clearing ships to depart, figuring that each one gone now is one less to worry about later. Suddenly Garibaldi links in with word that Varn has been taken. Then Takarn appears on the screen, demanding to know why they have sent a ship to the planet. Ivanova confirms that the last shuttle is in fact heading for the planet. Not willing to wait any longer, the alien ship attacks. The Hyperion returns fire and Babylon 5 launches fighters.

Meanwhile, Londo, piloting the wayward shuttle, employs erratic flying, much to the chagrin of his passengers, though he clearly is enjoying himself. The machine, seeming to sense Varn's presence, does not fire at them, which means there is only one last obstacle left.

Garibaldi launches in another shuttle in pursuit of the supposed kidnappers. He lands but when he reaches the heart of the machine, he is surprised to find Delenn, Draal and Londo. They explain that the machine will self destruct if there is not someone in it, and Draal will be taking Varn's place. This is what he has been searching for, a place where he belongs.

The battle in space is suddenly interrupted by a transmission from the planet. Draal's form appears in C&C and he declares that he has taken custody of the Great Machine, and that it belongs to none of them, but to itself and to the future. He gives its safekeeping to the Babylon 5 Advisory Council, counting on enlightened self interest to keep them away, but warns that any attempting to land will be destroyed. The aliens do just that and are quickly obliterated.

Back on the planet, Delenn is saying good-bye to Draal and Varn assures her that through the Machine he will see wonders beyond imagining.

As the Hyperion leaves for repairs, Pierce notes that the president's confirmation of Sinclair's jurisdiction came in and expresses...regrets if he overstepped his bounds. Sinclair accepts the apology, and is then told that his favors have borne fruit. He's got a clear channel to Mars for Garibaldi.

Michael is anxiously awaiting the call. He finds that Lise is alive and is able to talk to her. He apologizes for leaving her and says he intends to take his next leave on Mars, but she tells him that not only is she married, she's going to have a baby.

Later he is up in the observation dome, half-regretting making the call. Delenn finds him there, and he takes the opportunity to ask her why she didn't come to the commander when they realizes what had to be done. Delenn tells him that if she had, Sinclair would be the one down there now, that he, too, is seeking a purpose, but that his destiny lies elsewhere. She got Londo to go along by making a deal, and she now owes him a great favor, but she thinks he enjoyed himself and that it awakened something inside him long buried. That comment reminds Michael of his conversation with Lise and he walks off, leaving Delenn looking out at the stars.