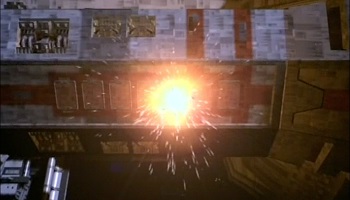 This always happens right when the President's about to visit.
Season 1, Episode 11:

Earth Force One cruises through space on its way to Babylon 5 where President Santiago will be giving a speech and delivering a new fighter wing to the station. While this is good news, it means that there is now a rush to get the spare cobra bay into shape, using inexperienced crews who are being worked round the clock, a situation ripe for an accident. The worst occurs when an explosion rock the bay, blowing one of the workers into space.

Another victim is brought to Medlab where the possible causes are discussed. An accident seems the most likely cause, and the victim's injuries appear to corroborate that. They then receive word that the president's head of security, Lianna Kemmer, has arrived and wants to be briefed on the situation. It turns out Garibaldi knows her, she was the daughter of a friend of his. She gives him a very cool reception and insists on taking charge of the investigation. Neither Garibaldi or Sinclair are happy about it, but she has the authority and no hesitation in using it.

Garibaldi goes off to make rounds, and catches a thief in the act. He gets a little too rough, however, and Sinclair has to pull him off the thief. He then gets Michael to tell him what happened between him and Lianna. He knew her family when he was on the force on Europa. HE was very close to them, but he caused waves with the local criminal gangs who decided to take care of him. They didn't come for him, though, they went for Lianna's father. She took the loss very hard and Michael lost himself in drink for a long time.

They are interrupted by a call from Dr. Franklin who asks them to come to Medlab. Kemmer is trying to revive his patient, even though it will likely kill him. As he wakes he says it wasn't an accident. It was a bomb set by Garibaldi.

Michael protests his innocence, but Kemmer insists he be taken off active duty. Sinclair reluctantly agrees. Later he goes to his quarters but finds they are being searched. While this is going on he tries to talk to her about what happened to her father. She firmly believes that it was his fault, caused by him trying to cover his own skin, but he protests that he would never have let it happen if he'd known. Just then, Lianna's second, Cutter, comes out with a set of diagrams for bomb designs and some Centauri currency. This is all Kemmer needs to implicate Garibaldi, but before she can arrest him, he runs off.

In C&C, Sinclair and Ivanova are surprised by a security alert for Garibaldi. Sinclair orders it canceled, but Kemmer tries to overrule him. The commander is getting a little tired of her high-handed attitude and shuts her down. Ivanova escorts her off the deck ("You are going to resist, I hope?") and she goes to get direct approval from the president's staff.

Garibaldi has gone to the Dark Star to find Londo. The Centauri ducats makes him the best lead he has at the moment. Londo admits he would do something like this, but he didn't. He then tells Garibaldi about some information the Narns took from Ragesh III and ransomed back to them for hard Centauri currency, so that makes G'Kar the next best lead. Garibaldi is going to need some cash and Londo, who has seen the blessing of the goddess of gamblers recently, hands him some money.

Kemmer is trying to reach Earth Force One, but Ivanova is conducting a diagnostic on the comm system, which means they will be offline for a few hours. Realizing they are stalling her, she uses her ships comm to make the call.

G'Kar has been expecting Garibaldi's arrival, and invites him into his quarters. Michael seems surprised that G'Kar knew he was coming, but the Narn knew he'd been talking to Londo, which meant he would be sent here. The Narns and the Centauri are always watching each other, after all. G'Kar also denies being involved, but takes the opportunity to make Garibaldi an offer. He has a ship that will take Michael to Narn space where he will be beyond the reach of Earthforce. Michael is not willing to betray Earth and refuses.

The new fighters arrive and are situated on the station.

Garibaldi is now in N'Grath's lair, trying to buy a high security pass. N'Grath protests that he is an honest businessman...er, insect, and refuses. Outside Garibaldi is forced to run from a security patrol. His escape leads him to the thief from earlier, who brought some friends along. Garibaldi is saved from them by Sinclair, who's been monitoring the security feeds for updates on Michael's location. Before they can talk, he is called by Kemmer. Garibaldi takes the opportunity to run off again.

On the vid link, Kemmer's superior, General Netter, orders Sinclair to give Kemmer his full cooperation. While he now has to work with her, he still thinks she's got the wrong motivation, allowing her past experience to cloud her judgement. "It's not justice you're after, it's blood!" Cutter links in, saying they're closing in on Garibaldi.

Michael has taken refuge in a seedy bar in Downbelow. He is able to hide from patrols for a while, but when presented with a bottle pours himself a drink, then several more. When he finally leaves, he can barely stand up, and when cornered by Kemmer's people can only stumble to the floor. She looks down at him and asks, "Drunk again, Uncle Mike?" She orders him taken to her command post.

As the president arrives, the new fighters are prepared for launch. Cutter goes off to check the launch bays one more time. Meanwhile, Lianna starts to interrogate Garibaldi, trying to get him to confess. He however feels that she's just trying to destroy his life like she thinks he destroyed hers. They are interrupted by one of the security guards who was sent by the commander to search the dead man's quarters. Inside were some detonators and Homeguard literature. Garibaldi makes the connection quickly, the president is making a speech inviting more aliens to come to Earth, something they would not like. He also realizes that Cutter, the one who had found the evidence in Garibaldi's quarters was there when he was named by the dying man. He must be in on it. Lianna is skeptical, but he persuades her to go and check to launch bays herself.

They are met by Cutter at the entrance, but as Kemmer goes to check the bay, Cutter stuns her and pulls a gun on Garibaldi. As he reaches down to take Lianna's gun, he takes his eyes off Michael, which is all the time he needs to knock the treacherous officer out. He then calls Ivanova and tells her to abort the countdown to launch. The countdown stops with seconds to spare. An investigation of the bays finds them rigged with bombs set to go off when the fighters dropped. It would have destroyed nearly half the station. Garibaldi has saved the day and is reinstated. He feels like he lost something, he gave in to the bottle again.

Later as Lianna is leaving, he catches up to her. She admits she was wrong and treated him unfairly. He tells her they both died inside but they're still here, both survivors. She tells him the president is fond of Babylon 5 and he says they need all the friends they can get. She gives him a parting hug, then goes off to her next assignment.