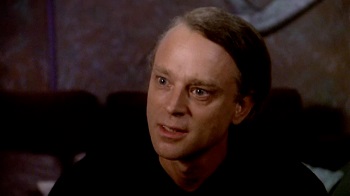 Would you believe there's a Dark and Troubled Past here?

Ivanova and one of the monks, Brother Edward, are discussing a dangerous situation... Sheridan's chess game as he plays against Brother Theo. The game ends with Theo checkmating the captain after which Ivanova is called to the docking bay. Kosh's ship has just docked but he's not on it. Lyta Alexander has returned from Vorlon space. In Sheridan's office she explains that she'd been felt drawn there ever since scanning Kosh's mind and now she's working for him. Ivanova has concerns about what Psi Corps will do when they find out she's there, but Lyta insists Kosh will protect her.

Garibaldi: Nobody's ever been to the Vorlon homeworld and back again, yet she goes and comes back like she just took a trip to the corner store. And now she's working for Kosh. is anybody else as creeped out about this as I am?

The others raise their hands.

Brother Edward is negotiating with a business woman when he finds a black rose that fell from his bag. He's not sure how it got there.

Delenn finds Garibaldi in the security office to ask about some security arrangements, but Garibaldi wants to see this news story about a murderer getting a mind wipe, which he finds satisfying.

In Medlab Franklin is examining Lyta, and finding her to be in excellent health. Surprisingly good health, actually. Several chronic health issues she's had her entire life are gone, but she can't say how it happened. The only thing he can find amiss is an unusually high level of oxygen in her bloodstream, but she insists she be allowed to get to work.

Brother Edward enters his quarters to find a message on his wall written in blood.

DEATH WALKS AMONG YOU.

When he brings Garibaldi to see it, it's gone.

Londo accosts Lyta in the corridor. He tries to pump her for information on the Vorlons, which he would pay greatly for. When she blows him off he threatens to inform the Psi Corps about her, and she counters by threatening to plant a nightmare deep in the mind of whoever ratted her out, and make them spend the rest of their nights alive screaming. Londo watches he leave with a contemptuous "Fine!"

Despite the scare, Edward continues his rounds, which includes interviewing various aliens about their religious beliefs, as he does with Delenn and Lennier. In the course of their conversation, he talks a little about Jesus Christ and how He waited in the garden of Gethsemane before being taken to his death. Edward wonders if he would have had the courage to remain there.

On his way home, a Centauri bumps into him. Almost immediately he is beset with the sound of screaming and voices calling for someone named Charlie as he loses his bag and sees more bloody messages before stumbling on the body of a woman with a black rose stuffed in her mouth.

Edward is sitting in his quarters, running what he saw through his mind over and over, until Theo comes in. He asks if anything is bothering Edward, who tells him about the things he saw, and how he's not sure if they're real or in his mind. Theo tries to comfort him, telling him to put it aside, but Edward is still disturbed. Despite Theo's counsel not to, he begins researching the things he saw.

Theo goes to Sheridan and asks that he find out what's going on, before Edward does.

Garibaldi finds Edward in the corridor outside his quarters, presumably looking for his bag, but he's staring at the wall where he found the second bloody message. Garibaldi has gotten back that there was no trace of blood on the wall, but he's got people checking for anything else.

Edward: Tell them not to bother. Why would an uneasy conscience show up in a lab report?

Garibaldi promises to keep an eye out for anyone trying to sell his bag.

Edward is in his quarters when his search turns up something: Brother Edward was once Charles Dexter, the Black Rose Killer. He killed several women, put the roses in their mouths, was arrested and sentenced to death of personality. Garibaldi has found the same thing, and briefs Sheridan. Dexter was presumed killed during a fire, but survived, with a personality programmed to serve society, which he did by joining the monks. Furthermore, Edward already knows.

Theo finds Edward in Downbelow and begs him to come back. Edward doesn't think he can.

Edward: How could they do it? They say it's humane... merciful. Do you know what it's like to wake up one day and discover you're a monster, a murderer? What if I had died, never knowing what I had been? How can I confess my sins to God if I don't even know what they are? The mind forgets, but the stain remains with the soul. The blood of innocent people is still on my hands. My memories are the creation of somebody else, and my soul is the soul of a killer, and everything that I have done has been a lie.

Theo protests that he's been kind and loving but Edward says it isn't enough, and he needs to atone for what he's done.

Theo: Edward... Edward! If you ask God to forgive your sins, He knows what they are, even if you've forgotten. Leave it in His hands.

Edward says goodbye and walks off.

Garibaldi's investigation hits a lucky break when someone tries to sell Edward's bag. The recorder he was using during his interview with Delenn was inside and he forgot to turn it off so it caught all the screams and everything he thought was in his head. Security also found a residue on his wall of a chemical that would resemble blood then vanish. It's clear someone is out to get revenge. But to restore his memories, they'd need a telepath, but Psi Corps has rules against that (and of course Minbari telepaths have a moral code). The only one it could have been is the Centauri Edward mentioned bumping into, as Centauri telepaths are more mercenary.

Edward is by himself praying when a crowd of people emerge from the shadows. The lead one asks if he knows who they are, the families of the women he murdered. They're here to make sure justice is done, but they wanted him to know what he'd done first.

Sheridan and Garibaldi manage to find the Centauri telepath, but he's being less than cooperative, so they have Lyta come in and get it out of his mind. Once she has a location, Garibaldi moves out. They arrive to find Edward strapped to a beam like a cross, on the verge of death.

Edward asks Theo to forgive them, he knew what was going to happen when he left.

Edward: I always wanted to know if I would have the courage to stay at the garden of Gethsemane. Now I know, Theo. Now I know.

Zack pulls Sheridan away to see they caught the ringleader. He proudly admits it, saying Edward had it coming. Zack has to hold Sheridan back as the guy is hauled off. As Edward dies, Theo forgives him of his sins, so he can pass into the next life guilt-free.

Since he doesn't bother to deny it, the ringleader is quickly tried and sentenced.

Theo meets with Sheridan to give him something Edward had been working on but didn't get to finish. Sheridan ponders on the difference between justice and revenge, and has to face it himself as Theo introduces the newest member of his order, Brother Malcolm, the murderer, now mind-wiped and programmed with a new personality to serve society. Sheridan has to restrain himself as Theo reminds him that forgiveness is a hard thing, but something ever to strive for.

In Kosh's quarters, Lyta stands as streams of energy flow out of her and into the encounter suit.