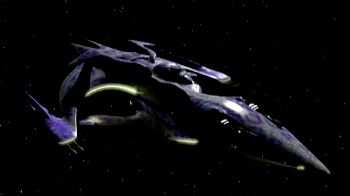 Delenn: These ships, once they target you, they never stop, never slow down, never give up, until they have destroyed you. They are nearly invincible.
Sheridan: I don't believe that. Every ship has a weakness.
Delenn: Believe what you will, until experience changes your mind. Take a good look, John, and remember it well. That is the face of our enemy.

Sheridan finds Kosh in the garden, after he hasn't been seen for a while. Kosh explains that being seen by so many witnesses was tiring and he's been resting in his ship. Sheridan, referring to his near death and save by the Vorlon recently, asks why he did it since it was such a risk?

Kosh: It was necessary.
Sheridan: Well as far as answers go, short, to the point, utterly useless and completely consistent with what I've come to expect from a Vorlon.
Kosh: Good.

In another part of space, a Drazi pilots a ship through a line of weapons platforms and ejects a smaller ship before being destroyed. The pilot of the smaller ship, a human Ranger, goes through the jumpgate and sets course for Babylon 5.

Back on the station, Sheridan and Ivanova are waiting for another VIP for an unknown purpose. Sheridan's getting sick of it, but Ivanova tries to get him to enjoy the mystery, the adventure...

Sheridan: Are you trying to cheer me up?
Ivanova: No sir, wouldn't dream of it!
Sheridan: Good. I hate being cheered up, it's depressing.
Ivanova: Well, in that case, we're all going to die horrible, painful, lingering deaths.

The VIP, David Endawi from Special Intelligence, arrives and asks to go someplace where they can talk, and arrange for Delenn to be there as well.

The Ranger arrives at the station and is brought to Medlab, exhausted, dehydrated and oxygen starved. Franklin thinks he isn't going anywhere, but as soon as he turns his back, the man vanishes.

Elsewhere, Morden finds Londo who has decided that the time has come for their deal to be terminated. Morden is not happy about it, but seems to relent. Before he walks off, however, the Shadows say something and he tells Londo there are some arrangements that he wants to discuss later, after which he agrees that he'll disappear for as long as Londo wants.

In a conference room, Endawi shows the footage from Keffer's fighter of the mysterious ship. He asks Delenn if she knows what it is, but she replies she can't help him, she's never seen one before. Endawi is disappointed, but not surprised. He'll be asking all the other ambassadors as well, and he hopes he'll have better luck. After he leaves, Sheridan talks to Delenn, and confirms his suspicion that this is in fact one of the Shadows' ships. She apologizes for not telling him, but they need to keep the Shadow's in a false sense of security.

After she leaves Lennier catches up to her and says someone is looking for her, someone who gave him a Ranger pin.

Endawi goes to see Londo next. Londo is astonished to see it, and recounts part of the dream he had the day the war with the Narns started, where he saw ships like that passing overhead. Endawi asks if that's all, but Londo doesn't know anything else. Endawi leaves, leaving the disturbed ambassador to his thoughts and drinks.

Delenn and Lennier make their way to a seedy Downbelow bar where the Ranger approaches them. He introduces himself as Marcus and asks for the pin back. He needs help but suggests that they go somewhere else. Before they can leave, they are accosted by a gang of thugs. The leader demands everything they have, but Marcus refuses and a fight starts in which he, Lennier and Delenn quickly mop the floor with them. They then head off to see the captain.

Ivanova: Captain, the day something happens around here and I don't know about it, worry.

Once Ivanova has brought everyone up to speed, Marcus explains why he's there. The world he came from, Zagros VII, the site of a Ranger training camp, has been surrounded by Centauri blockade mines. The camp is the only reason anything like that would happen, and the Drazi government is busy with the main Centauri fighting on the other side of their space and can't do anything about it. Marcus asks Sheridan to come help them, but Garibaldi points out that they don't have the resources either, and they're still in hot water over their last confrontation with the Centauri. There's also Mr. Endawi, who will no doubt be suspicious if Sheridan suddenly disappears. But Sheridan accepted command of the Rangers and feels obligated to go. He leaves Garibaldi in charge, and tells him to buy as much time as he needs. He orders a shuttle prepped.

Later, he, Ivanova and Marcus in a shuttle and Delenn and Lennier in a flyer head out using a false destination.

Londo and Morden meet up and carve up the galaxy between them. One side is for the Centauri's use, they can do whatever they want there, and the other is for Morden's associates. Londo agrees, but before leaving, Morden points out one little detail. A world on the edge of their space is of interest to them, and Lord Refa has been kind enough to secure it for them.

Sheridan's party comes out of hyperspace to find a ship of unknown design there, which Marcus identifies as the White Star.

Back on the station, Endawi has found out Sheridan's missing and wants to know why, but Garibaldi keeps avoiding the question, after all, what kind of security chief would he be if he told someone like himself everything that was going on? Endawi has had no luck with his investigation, and Garibaldi suggests he go talk to G'Kar, unofficially, and Garibaldi just won't tell himself about it.

Delenn is currently showing the others around the White Star. A hybrid of Minbari and Vorlon technologies, she's faster and more powerful than anything else her size, and can open jump points, something that usually only larger ships can do. And she looks different enough to not be recognized as Minbari.

Sheridan is impressed, and would love to play around with it, but they've got a job to do. He orders a course to Zagros VII.

In G'Kar's quarters, Endawi shows the recording to the Narn, who mutters, "Finally," and begins leafing through his book of G'Quan. He shows Endawi an illustration from the Book that resembles the Shadow vessel, and explains that they had come to the Narn homeworld a thousand years ago. He's been trying to warn everyone all last year, but no one listened. He's hopeful they will now.

As the White Star arrives at Zagros VII they get ready for a fight, but other than the mines, there's nothing else there. The reason why no other ships are present becomes apparent when a Shadow vessel appears. The ship engages them... and misses. Delenn is confused, but Sheridan figures they don't recognize them and are trying to find out who they are before they destroy them. Using that to give them maneuvering room, they clear a path to the jumpgate and the Rangers rush through.

The Shadows follow them, which is part of Sheridan's plan. Delenn thinks he's in over his head, and begs him to find help since they have no hope of destroying it on their own.

Sheridan: With all due respect, Ambassador, I've heard that before.

His plan is to open a jumppoint inside an active jumpgate, and hope the White Star is fast enough to clear the blast radius. When they reach the Markab jumpgate, which other races have been using to steal things from the Markab homeworld, he waits till the Rangers are clear, then activates the jump engines just as the White Star races through, leaving the Shadow vessel to get caught in the blast, destroying it. The White Star is rocked pretty thoroughly, but survives.

Back on the station, they find Endawi who demands to know what they have been up to. They give some excuse of assisting the Minbari government and placate him. He's finished his investigation and is leaving. Back on Earth he presents his findings to a senator, though there's nothing really concrete. After he leaves, Morden walks in to the senator's office, accompanied by a Psi Cop. They discuss some plans they have going, and how this "unknown threat" could be used to move them along.

Back on the station, Sheridan organizes a war council to discuss strategies to defeat the Shadows, comprising of himself, his command staff, Delenn and Lennier and Marcus.