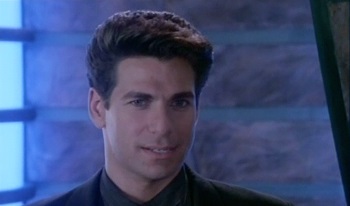 Morden: I've been out of circulation. Spent the last few years doing some exploration out on the rim.
Security: Find anything interesting?
Morden: (smiles) Yes.

The "day" dawns aboard the station, and Ivanova is awoken by an overly cheerful sounding computer wake-up call. In C&C she tells the commander she has trouble waking up when it's dark out.

Sinclair: But in space it's always dark.
Ivanova: (Beat) I know.

They are interrupted by a distress signal from a Starfury. It's been ambushed by Raiders and is being overwhelmed. Sinclair scrambles a response but it's too late.

In the customs area, a well-dressed man, Mr. Morden, has just arrived. Despite his identicard being a little out of date, to which he explains that he's been out on the Rim for a while, he is allowed aboard without incident.

Sinclair, Ivanova and Garibaldi are discussing the Raider situation. They've been getting bolder and are attacking closer and closer to Babylon 5, too close to escape through any jumpgates. Sinclair puts Delta Wing on alert, then asks to talk to Garibaldi. He recounts what happened when he was forced to re-live his experience at the Battle of the Line and what he remembers from it. He's gone as far as he can and asks Michael to see if he can get any further.

Londo is sitting in the Dark Star, when he is approached by a group of humans. The lead one gives him a box which he opens. Inside is a jeweled orb, the Eye, an artifact of great importance to the Centauri Republic. The man is glad it means something to him, but considers it just another job. Londo leaves, with Morden watching from a distance.

Some time later G'Kar is in his quarter when Morden visits. He only wishes to ask the ambassador a question: "What do you want?" G'Kar is initially confused but after repeated askings finally begins to tell him: To destroy the Centauri, to ruin their homeworld and visit everything they did to the Narns back upon them. Morden listens and when G'Kar is finished, he asks, "And Then What?" G'Kar is not sure. Morden leaves, looking disappointed. G'Kar stares after him a bit then says, "Nonsense!"

Londo is in the docking area where he greets a Centauri noble, Lord Kiro. Kiro's family was the original possessor of the Eye and he has come to deliver it to Centauri Prime. He is accompanied by Lady Ladira, his aunt and a seeress, but as soon as she comes on board she begins having a vision, fire, death, and destruction, foretelling the doom of the place. She then faints. Some time later, Londo and Kiro are discussing what she said. Kiro says she's been wrong before, and that when he was born she predicted he would be killed by a Shadow. He then asks to see the Eye, and Londo takes him to his quarters. A shady-looking character begins following them, and speaks into a communicator, "Six to One, have located target."

Morden has gone to Delenn next, but he never gets an answer of any kind; a silver triangle appears on her forehead which she covers before he can see as she turns to face him. An unnatural darkness falls over his face and she demands Morden get out. As he leaves (and the triangle fades), she fearfully whispers "They're here."

As Kiro looks at the Eye, and wonders aloud why he should give it back, it ought to be rightfully his. Londo talks him down, saying any attempt to secure the throne for himself would only result in his death. Ladira is asleep, but having fitful dreams of what seems to be a battle on the station, which ends with the sound of an explosion as she awakes.

A freighter, the Achilles, is cruising to the next jumpgate when Raiders suddenly appear. They immediately go to full thrust and send out a distress signal. Babylon 5 receives the call and launches Ivanova leading Delta Wing to assist. Six speaks into his communicator, saying they've taken the bait and to keep them busy.

Kosh's ship arrives at the station, and docks. Morden sees Kosh in one of the corridors and ducks out of sight as he passes.

Londo receives a call from Kiro saying he is ready to leave, and Londo grabs the case holding the Eye and heads out. At the transport tube, he is accosted by Morden. He tells him to make an appointment, which Morden had already done. Londo then asks him what he wants, to which Morden replies in amusement, "That's what I was going to ask you." Londo is not in the mood for games, but Morden is persistent, and eventually Londo gives in and tells him.

"I want my people to reclaim their rightful place in the galaxy. I want to see the Centauri stretch forth their hand again and command the stars. I want a rebirth of glory, a renaissance of power. I want to stop running through my life like a man late for an appointment, afraid to, to look back or to look forward. I want us to be what we used to be. I want... I want it all back, the way that it was. Does that answer your question?"

Morden watches him leave with a satisfied look and says, "Yes, yes it does."

In C&C, Sinclair is bothered by the fact that this attack is considerably further than the others have been. He asks for the Achilles' manifest. Meanwhile, as Londo, Kiro and Ladira are walking, they are ambushed by Six and an accomplice. They take the Eye, then march the three of them forward at gunpoint. Sinclair finds nothing but farming equipment on the manifest, and figures that the attack is a diversion. He calls Delta Wing back to the station. A check of ship schedules shows Kiro's ship is soon to leave, and he heads for the docking bay. There, Six puts the gun to Kiro's head and threatens to burn through the station's hull if he has to. Sinclair allows him to leave. He intends to allow the ship out then have Garibaldi and Alpha Wing disable it. Londo tries to lead Ladira away, but she is muttering about the Shadows coming for them.

The ship leaves the station and Alpha Wing launches and begins pursuit, but a jump point forms nearby and a large ship with Raider fighters appear. A firefight erupts and Kiro's ship docks with the Raider mother ship in the confusion. Sinclair orders Garibaldi to drive the Raiders toward the back of the station and when they are in position orders Delta Wing in through the jumpgate.

On the station, alarms are going off and people are running scared, when Morden finds himself face to face with Ambassador Kosh. The Vorlon gives a warning: "Leave this place, they are not for you. Go. Leave. Now." As Kosh speaks, Morden's heretofore pleasant expression melts into a look of absolute loathing.

With the fighters in place and station defenses ready, Sinclair orders both wings and the defense grid to fire, creating a gauntlet that obliterates the Raider ships. The mother ship, however opens a jump point and escapes.

Later, Sinclair and Garibaldi discuss the aftermath of the battle, with Garibaldi mentioning that Kosh's encounter suit was damaged but the Vorlon won't say how. Sinclair then has Londo and Ladira come into his office and demands to know what was on that ship that the Raiders wanted. As he speaks Ladira picks up a drink, but as she looks into it she sees the Raider ship emerge from hyperspace. Inside, Kiro is speaking with the Raiders, sounding more like a partner than a hostage. He was working with them to get the Eye so he can make an attempt to become Emperor. The Raiders have different ideas. They have no illusions that the Centauri nobility will follow him just because he has the Eye, but they know how much it's worth and if they can ransom it, and Kiro, they might be able to buy another mother ship, maybe even two.

An alarm suddenly sounds and they go to see what the problem is. Outside, the space in front of the ship seems to shimmer and a huge and terrifying alien ship materializes before them, then fires a beam weapon which carves the Raider ship up like a hunk of well-aged spoo. Aboard the station, Ladira drops her mug on the floor.

Later, Ladira is preparing to leave. Londo is despondent, certain his career is over, and that nothing short of a miracle could save him now. After he leaves the door chime sounds and Morden comes in. Londo is not in the mood, but Morden is not there for questions this time. He gives Londo a package, calling it a gift from some "friends you didn't know you had." Londo opens it and is stunned to find the Eye. He rushes out to find Morden, who is nowhere to be seen. "Let me buy you a drink!" he calls. "Let me buy you a whole fleet of drinks! How can I ever find you to thank you?"

Morden's disembodied voice responds, "We will find you, Ambassador."

Garibaldi meets with Sinclair and tells him what he's found out. Jeff was very far down the line for command of Babylon 5, but everyone else — generals, admirals, ambassadors, the whole brass — were rejected by the Minbari. They gave their support to the Babylon Project as the other major source of funding with the condition that they would have veto power over who was put in command, and they wanted him. As for why, neither of them can think of a reason.

Later, Sinclair meets Ladira in the boarding area. She tells him of her vision, and warns him that although they survived this crisis, their doom still hangs over them. She offers to let him see for himself. As she puts her hand on his face, he sees a single shuttle leave the station which then explodes behind it. As he comes back to himself, he asks if this is what will be, or what might be. She responds, "The future is always changing. We create the future, with our words, with our deeds, and with our beliefs. This is a possible future, Commander. And it is my hope that you may yet avoid it."

She bows then walks off, leaving a disturbed and worried commander behind her.