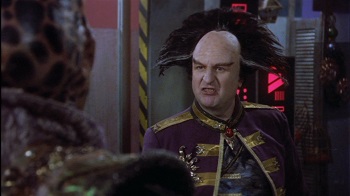 Establishing their relationship for the whole series.
Season 1, Episode 1:

Midnight on the Firing Line

Londo: What reasonable explanation could there be for the slaughter of unarmed civilians?
G'Kar: Curious, we asked the same thing when you invaded our world. The wheel turns, does it not, Ambassador?

As the day begins at the remote Centauri colony of Ragesh III, the routine is broken when an unknown force jumps in and begins attacking. Unable to match the attackers, the small defense force is quickly overwhelmed. On Babylon 5, Londo is just introducing his new attache, Vir, who has brought the news of the attack. An emergency meeting of the Babylon 5 Advisory Council is called, but no one knows what is happening just yet. Sinclair advises they adjourn and consult with their governments.

While they do that, the station's new Second-in-Command, Susan Ivanova, receives a distress call from a transport ship, and Garibaldi, realizing the raiders are back, heads out to investigate. As he leaves, the new resident telepath, Talia Winters, arrives to check in after her arrival, but Ivanova brushes her off.

Londo finally receives a recording taken from the colony and finds Narn heavy fighters appearing in it. Enraged, he storms off to confront G'Kar, who had just found out about it himself. The two trade insults until they are broken apart by station security. Later, while Sinclair visits, Londo admits that his nephew is a leader on Ragesh III, and he tells of a dream he has that predicts his death as he and another strangle each other. Londo knows who the other person is: "Twenty years from now, G'Kar and I will die with our hands around each others' throats."

After Garibaldi returns, he says that the raiders are getting heavy weapons from somewhere, and that there must be a leak in the trading companies.

Londo, meanwhile, has gotten more bad news: rather than risk a confrontation with the Narns over a small colony, the Centauri Republic is going to drop the matter. Frustrated, Londo decides to try and get support for sanctions against the Narns, which he hopes will force his government to action. That night, Sinclair and G'Kar run into each other in the gardens. G'Kar tries get Sinclair to side with him, saying that the Narns had sold Earth weapons during the Earth-Minbari War, but the commander rebuffs him, saying Narns will sell to anyone who can pay.

The next day, the meeting of the League of Non-Aligned Worlds is about to commence and Sinclair has been ordered to vote against sanctions. Ivanova reports to him that Garibaldi is about to launch the mission to intercept the next raider attack, but he suddenly realizes there's a connection and he decides to fly the mission himself. He sends Ivanova to the meeting in his place. She votes in favor of the sanctions, because Sinclair was unable to find her before he left and tell her not to.

At the meeting, G'Kar tries to say that the planet was one of the ones the Centauri took from them. Delenn calls him out on this, but he says they are about to receive a transmission from the colony, and Londo's nephew appears on the screen and gives a message saying that the Narns did not attack, and were actually asked to come and lend assistance. Londo claims that the statement was forced; G'Kar counters by revealing that the Centauri government had chosen not to interfere, and that Londo's actions in calling the meeting were therefore inappropriate. G'Kar then asks for a vote to dismiss charges.

Sinclair finds the raiders attacking the transport and orders his fighters to engage. After a quick fight they raiders begin to retreat. Instead of pursuing, Sinclair heads the other way, assuming they will retreat in the wrong direction to lead him away from their base. He finds it in a small asteroid field.

Back on the station Londo has had enough. He assembles a weapon from components hidden throughout his quarters and heads out, but he runs into Ms. Winters, who senses his intention: kill G'Kar. She warns Garibaldi who heads Londo off and convinces him to back down. When Sinclair returns, he has G'Kar sent to his office, where he presents everything he found on his mission, including the Narn agent watching over the weapons the Narns sold to the raiders, and data crystals containing information that Ragesh III actually was invaded and that Londo's nephew made that transmission under duress. Faced with this, G'Kar is forced to back down.

Later Talia is finally able to meet with Ivanova, after she gets off duty, and finds out a little why she was avoiding her. Ivanova does not like the Psi Corps, since her mother, who was a telepath, was forced to take suppressant drugs until she took her own life.

And in other news, incumbent president Luis Santiago wins his bid for re-election as President of the Earth Alliance. This will be important later.