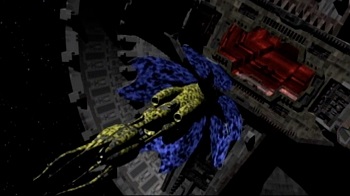 The hero of the hour, Kosh's ship.

While I was asleep, the...the ship, it...it sang to me.
—Dr. Jacobs
Advertisement:

Up in Docking Bay 13, Sheridan and Ivanova are marveling at Kosh's ship. "They must be at least a thousand years ahead of us." Sheridan says, and tries to go closer, but is driven back by some kind of defense system. Before they can do anything else, Garibaldi shows up with news.

As they leave, Kosh appears and the ship presents a message on its side to him.

An alert has gone out that Dr. Everett Jacobs, the president's former physician is now a fugitive. He is said to have stolen information and has apparently come to Babylon 5. An Agent Cranston from Earthforce arrives to conduct a search for him, and Sheridan agrees to cooperate.

Dr. Franklin, who is Jacobs' former student, protests that Jacobs was a humanitarian and wouldn't do something like this, but Garibaldi isn't so sure.

In the meantime, Dr. Jacobs is wandering through the Zocalo trying to get an Identicard, but the merchants refuse to sell him one when they see how desperate he is and figure he must be on the run.

Sheridan runs into Kosh in a corridor and asks him about the dream he had a while back. Kosh's response is as enigmatic as ever:

Kosh: I sought understanding. I listened to the song. Your thoughts became the song.
Sheridan: Has this ever happened before?
Kosh: Once.

Later as he and Garibaldi are reviewing the search patterns that will be used, Sheridan notices a ribbon on a wall and hastily leaves. A short time later he meets with an envoy of General Hague (Sarah) in a dark corridor. She informs him that Dr. Jacobs does not have stolen information, he has information that then Vice-President Clark did not have a virus when he left Earth Force One, implying he knew it was going to explode. She then tells him they need to find Jacobs, get a statement from him and get him off station alive.

Sheridan: Yeah, you want mayo on that?

He runs off to inform Garibaldi.

Later, Garibaldi sends a secret message to Franklin telling him to meet him at his place. He intends to go looking for the doctor and wants Franklin to come along. He takes a couple of guns and puts on a fedora, calling it a "clever disguise".

Jacobs, in the meantime, has fallen into the hands of some unsavory characters who find his official pocketwatch and figure he must be worth something to someone.

Sheridan is dealing with Cranston, and manages to send him on a wild goose chase giving Garibaldi and Franklin some breathing room. He suddenly gets notice that Ambassador Kosh wants to see him.

Franklin and Garibaldi haven't been having much success until Garibaldi notices a merchant trying to sell Jacobs' watch. He intimidates the man into telling him where he got it and he and Franklin are able to find Jacobs that way.

In Kosh's quarters, Sheridan tries to find out why the Vorlon wants to see him, but after several attempts, Kosh, seemingly disappointed, dismisses him. Sheridan gets irritated and demands to know what he wants, prompting a strong response from the Vorlon: "Never ask that question!" Eventually, Kosh says he will teach Sheridan.

Sheridan: About yourself?
Kosh: About you. Until you are ready.
Sheridan: For what?
Kosh To fight legends.

The crew manage to rescue Jacobs from his captors, but now they have another problem. Cranston is about to conduct a full sweep of the station for the tracking implant Jacobs has. They need to get him off the station now, but all the docking bays are covered. All except one, Sheridan realizes.

Later, Cranston is with Sheridan and Ivanova in C&C as they activate the sweep. Moments before, Kosh's ship is granted clearance to leave. The scanner sweep runs down the length of the station and reveals...nothing. Cranston is not happy, and as Kosh's ship requests permission to jump out, he demands it be scanned first. The scan turns up one lifesign, not human. Sheridan points out that they could order it back and search it, but that would create a terrible diplomatic incident. Cranston lets it go.

After Cranston and his posse leave to pursue other leads — many of them handily provided by the B5 command staff — the ship comes back; the command staff meet it in the docking bay. Sheridan explains that the ship itself is alive, and that this was what the sensors detected. After a few moments, it opens and takes out a comatose Dr. Jacobs. Franklin wakes him up and Dr. Jacobs looks up at the ship in wonder, saying it sang to him.

Sheridan meets with Sarah again, and gives her the data crystal that has Jacobs' readings on it. She thanks him and promises to get Jacobs off station as quickly as possible. As for the data crystal, it isn't enough evidence to use against President Clark — yet — but it's a start.