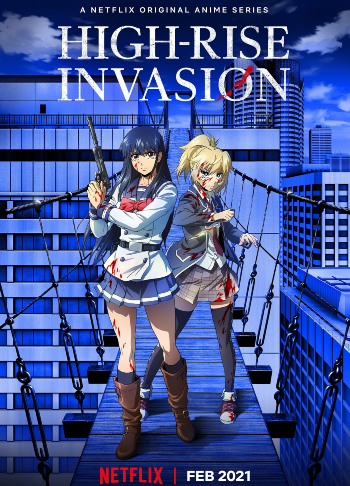 High-school girl Yuri Honjo suddenly finds herself on the rooftop of a high-rise building. She's trapped in a bizarre world surrounded by skyscrapers, where a masked man cracked open a man's head with an axe before her eyes. Finding a way to survive this bizarre world, find her beloved brother, and escape becomes her top priority, but she is beset by danger not just from the mysterious Angels, which possess both inhuman strength and cruelty, but other survivors turned cruel or desperate by the insanity of the high-rise world.
Advertisement:

Written by Tsuina Miura (initial writer of Ajin) and illustrated by Takahiro Oba (Box!), High-Rise Invasion is a manga series with a heavy reliance on Fanservice and violence, with barely a chapter going by without either a Panty Shot or someone's head exploding. The manga was serialized in Manga Box from 2013 to 2019.

A sequel, High-Rise Invasion Arrive, set a while after the first story, was released a few months after the end of the first series. It follows Senya, a young boy who dreams of being an astronaut that is transported to a wrecked version of the High-Rise World and obtains strange skills from a rifle he finds.

An anime adaptation by Zero-G was released on Netflix in 2021.