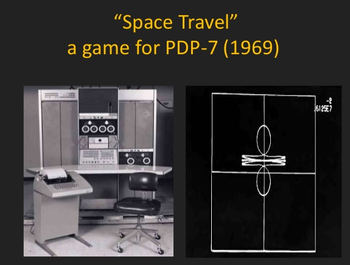 The system, and the game itself. note Part of Slideshare presentation.

Space Travel, written by Ken Thompson on a Multics system in 1969, is a Top-Down View 2D Simulation Game of flight around our solar system. You fly a spaceship, flying to and landing on the planets and their moons. It's a Wide-Open Sandbox with no goals or enemies. Just fly around. Each planet and moon exerts gravitational pull on your ship, changing its trajectory. Sizes, masses, and distances of of the planets and moons are all depicted realistically. Planets and moons follow orbits, but not realistically; the orbits are perfect circles and all on the same plane.
Advertisement:

It's of historical interest because Thompson and Dennis Ritchie invented UNIX to port it to an unused DEC PDP-7. In that sense, it may be the most influential video game ever developed. You're most likely reading this page because of it.