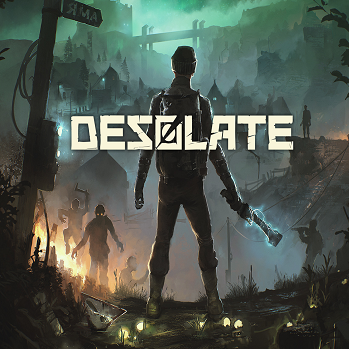 Desolate is an Indie-budget First-Person Wide Open Survival Sandbox game for the PC. It was released under Steam's Early Access program in February 2018, with the full game finally being released in January 2019. It is based on the developer's previous game, Beyond Despair, which was released in 2017 only to be a commercial failure resulting in the closure of the development studio. The dev team reformed under a new studio and heavily overhauled Beyond Despair into Desolate.
Advertisement:

The game is heavily inspired by the S.T.A.L.K.E.R. series, taking place during the Soviet era on the island of Granichny, the research hub of the New Light Conglomerate. The island is overrun with mutants and paranormal phenomena in the wake of Day X, when New Light's founder Victor Ognin went rogue and deliberately plunged the world into chaos releasing monsters and anomalies across the world. Players take the role of a Volunteer, an agent of New Light tasked with exploring Granichny in search of a means of reversing the horrors Ognin has unleashed upon the world.

Desolate has a significant emphasis on melee combat, with firearms and the ammo for them being very rare and hard to come by. The game also supports up to 4 player co-op.