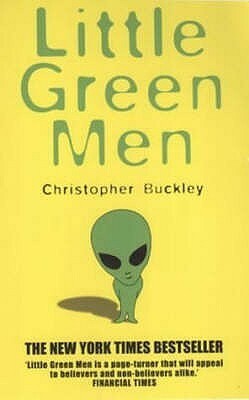 A novel by Christopher Buckley, set in The Present Day of 1999.

John Oliver Banion is the host of Sunday, the top-rated weekend talk show. His sponsor, Ample Ampere, has just built a new electric chair to replace the one used in the only execution he had ever written less than approvingly of (the one where the man exploded). With his busy lecture schedule (his speaking fees start at $25,000), he no longer has time to write big serious books on policy like his best-seller Screwing the Poor. He is chosen to host the upcoming presidential election debates (sponsored by the League of Gay Voters). He gets to grill the (unnamed) President in a live interview (with commercials) over his moving up the launch date of the orbital space station Celeste, and only one worker deep in the basement of the Social Security Administration knows the connection between this and his getting abducted and probed by aliens twice in the next few weeks. Nielsens for Sunday soar as UFO's replace the Russian situation as topics of discussion, though Ample Ampere objects. Banion calls for Senate committee hearings on alien abductions, and rallies the people for a Millennium Man March on Washington.