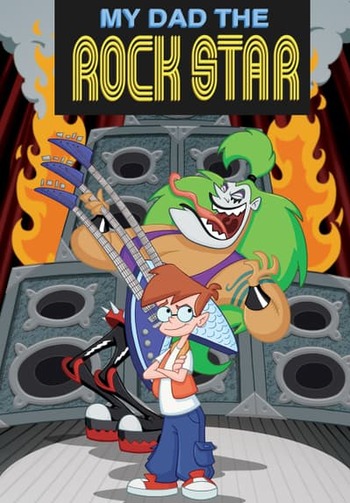 Just an ordinary kid and his not-so-ordinary dad.
"It's so hard just to feel normal
When everyone is completely paranormal
And everything is totally deranged
And you're the only one who's sane!
Sometimes it gets so unbearable
Mostly I feel unbelievable
I'm a freak 'cause my dad is a rock star, yeah!"
— The first lines of the show's opening theme tune
Advertisement:

Have you ever wondered what it would be like to be the kid of a world-famous rock musician?

Well, 14-year-old Willy Zilla probably knows that better than anyone else in the world, for this mild-mannered boy is the son of Hot-Blooded rock 'n roll legend, Rock Zilla. Alongside his Granola Girl mother Crystal (Rock's wife), older sister Serenity (Rock's Bratty Teenage Daughter), the family's former tour bus driver Skunk, and their pet Komodo dragon Mosh, Willy has just moved into the town of Silent Springs, where his dad has decided to settle down in a big fancy mansion after many years of touring the world. Willy is ecstatic for the opportunity to finally live like how other kids do for the first time since he was born, attending school with his friends Alyssa and Quincy (nicknamed "Q") and trying to blend in with the crowd while avoiding everyday kid problems like his school bully "Buzz" Sawchuck. But as Willy knows all too well, when you're the son of The Rock Star, it's actually pretty hard to have a normal life, and sooner or later, being the kid of a celebrity is bound to get you noticed by others whether you want it or not.

My Dad the Rock Star was the brainchild of none other than KISS' very own Gene Simmons. He originally produced it in the form of a kid's book called My Dad the Rockstar: Rebel without a Nose Ring, which was published in 2001 (and later adapted into an episode of the first season). However, Gene Simmons later decided to pitch his idea as an animated series to the world-famous Canadian animation studio Nelvana.

The results debuted on September 1, 2003 on the Canadian animation network Teletoon, with Gene Simmons serving as executive producer for the series. Despite having excellent ratings on its origin channel, the show lasted for only 26 episodes over 2 seasons, as Gene Simmons wanted to focus more on different projects. It also aired in the United States on Nickelodeon.

Nelvana has every episode on their "Keep It Weird" channel on Youtube. You can check them out here