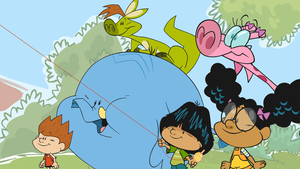 My Big, Big Friend (Portuguese: Meu Amigãozão) is a Brazilian-Canadian animated children's series created by Canadian and Brazilian Claudia and Andres Lieban Koogan Breitman (with Kevin Gillis, creator of The Raccoons, as a producer), co-produced by Brazilian studio 2D Lab and the Canadian company Breakthrough Animation. Had its first showing on August 9, 2010 on Discovery Kids Latin America and May 9, 2011 premiered on TV Brazil. It premiered in Canada on Treehouse TV on August 20, 2011. It is available for streaming on Netflix.

The show centers around the friendships of three children, Yuri, Lili and Matt, each of whom has a "Big Big Friend" who is invisible to adults and other children but seen by all three friends.

Not to be confused with the show My Giant Friend. Has nothing to do with the trope Big Bad Friend.