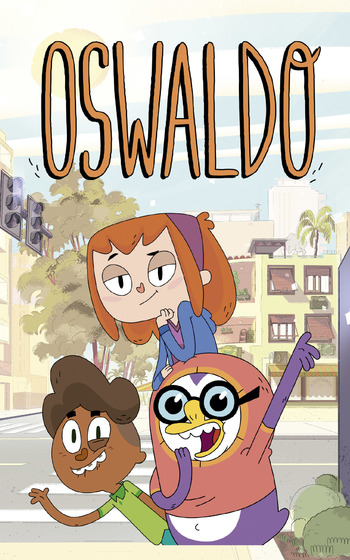 Oswaldo is a Brazilian-Indian animated series co-produced by Brazil's Birdo Studio and India's Symbiosys Entertainment. It is the creation of Pedro Eboli, a Brazilian animator who would later go on to make North American cartoons like Netflix's Cupcake & Dino: General Services and Nelvana's Ollie's Pack.

The show's eponymous star is a 12-year-old penguin who was found on the beaches of Barra da Tijuca (a neighborhood in Rio de Janeiro) as a baby and raised by human parents as one of their own. Now infused with the quirks, obsessions, and pop culture knowledge of a typical tween, Oswaldo must navigate through the greatest challenge that any 12-year-old can face — middle school. But even for an excitable little oddball like him, things like that are always harder than they sound, and any problem he faces can and will result in the most unpredictable and bizarre outcomes. But no matter what kind of insanity Oswaldo faces on a normal day, our eccentric protagonist can always count on his parents Feramina and Paulito, as well as his best friends Leia and Tobias, to have his back and always be there for him.