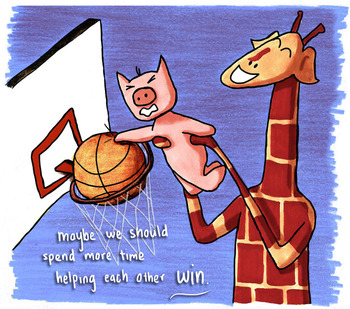 This giraffe puts his height to good use.
Image

. Used with permission.
"The Giraffe took the horse's head and led him along on the most level parts of the road towards the railway station, and two or three chaps went along to help get the sick man into the train. "
— Henry Lawson
Advertisement:

When giraffes appear in fiction, they're often nice and heroic. There are quite a few reasons for this, although it may mainly be based on their appearance. Their bright golden fur and recognizable spot pattern looks appealing, and their Long Necks are often seen as comical. Their tall bodies, long eyelashes, and short, rounded horns give them a Gentle Giant appearance.

It helps that real giraffes actually are fairly passive. They aren't very territorial, but very social. Giraffes do fight, with their horns and long necks, but they're more well known for striding gracefully across the savanna. Also, it's rare for them to attack humans. As a result, fictional giraffes tend to be gentle, caring characters rather than fighters.

It also helps that giraffes are ungulates, a group of hoofed mammals that also includes deer, pigs, and other animals that often have good reputations.

Sub-Trope of Herbivores Are Friendly. Often overlaps with The Quiet One due to the myth that giraffes are mute. Compare The Marvelous Deer, Honorable Elephant and Gentle Gorilla for the other tropes regarding gentle giant herbivores. Also compare Huggy, Huggy Hippos, although hippos are omnivores and much less passive than giraffes.