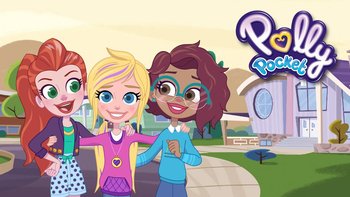 Tiny power!note From left to right: Lila, Polly, and Shani.
"The story all begins in the town of Littleton
Polly came across a locket that she keeps inside her pocket..."
— Expository Theme Tune
Advertisement:

Polly Pocket is a Canadian-American animated TV series based on the 2018 rebrand of the Polly Pocket toy franchise. The first two episodes premiered on Family Channel in Canada on July 1, 2018, and the rest of the first season continued on August 4.

Polly Pocket follows the adventures of Polly Pocket, a clever and curious inventor who inherits (and fixes) a magic locket from her Grandma that allows her to shrink 4 inches tall. She embraces her pocket-sized powers and finds the upside of shrinking can open up new adventures for her with her best friends Lila and Shani, all while keeping her locket abilities hidden.

Meanwhile, 60-year-old woman Griselle Grande, along with her dimwitted granddaughter and sidekick Gwen, attempt to steal the locket from Polly to conquer the town of Littleton by shrinking its citizens and trapping them in a model city called "Grandeville" (It's about as weird as it sounds really), and it's up to Polly and her friends to stop her.

The two-part series premiere, labeled as "Polly Pocket Movie: Tiny Power", premiered on Universal Kids exactly one year later in the US on July 1, 2019, and concluded on September 19, 2019. The whole series is available on Hulu

as of 2019, and the official Polly Pocket YouTube channel has uploaded nearly all the episodes for free. It has been released on DVD in the UK and Ireland, Italy, France and Germany, but nowhere else.

Since season two, the series has released new episodes on Netflix. Season two episodes are split into two side-by-side segments. Beginning with season three, the episodes are cut down to eleven-minute increments. The last few episodes of the first half of season three shifted the main setting to an Amusement Park called Rainbow Funland. The series is currently in its fourth season.