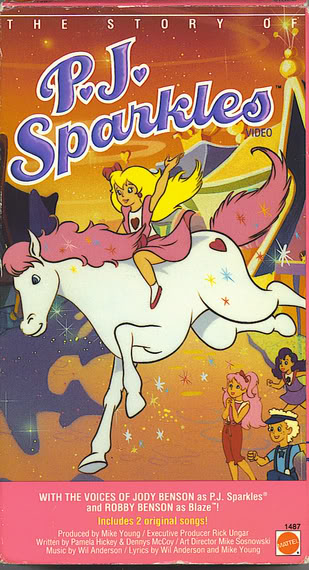 P.J. Sparkles is a 1992 animated movie that was released with the Mattel doll of the same name, courtesy of Mike Young Productions. Jodi Benson of The Little Mermaid fame lent her voice to the protagonist, and a few other big stars lent their voices, such as Robby Benson.

Poor P.J. is a sweet orphan girl who lives in Mrs. O'Malley's orphanage. Discouraged that everyone she gets close to is adopted, and that she hasn't been adopted herself, she wishes on a star for someone to love. Thanks to this wish, she is transformed into a magical girl, gives herself the last name "Sparkles" and soon finds herself in Twinkle Town. There, she finds other children who wished for someone to love them, and with The Power of Love, she makes Twinkle Town live up to its name.

P.J. is soon summoned to help Peter, a lonely boy back on Earth, leaving Twinkle Town open to the evil machinations of The Cloak and Betty, who prefer things drab and dreary. Will P.J. be able to undo the damage done to Twinkle Town while still helping Peter?

Tropes related to the special: