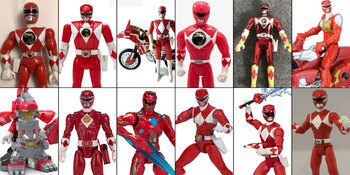 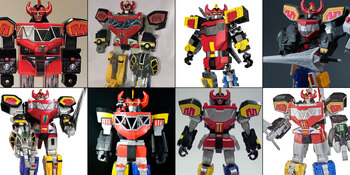 Being a Merchandise-Driven franchise, it's only natural that Power Rangers would have had many, many toylines over the years. Thanks to the show getting new Humongous Mecha and (after Season 3) new suits every season (every two seasons from Power Rangers Samurai onward), there have always been ample opportunity to refresh the line every year.

Typically, the average Power Rangers toyline for any given season will include the following:

When Saban regained the rights to the franchise, a higher quality toyline was introduced aimed at older fans.

There have been other lines over the years, such as Happy Meal toys, preschool-aged toylines, miniature statues, blind box toys, and more, but this page will mostly concentrate on the central toylines by Bandai and Hasbro.