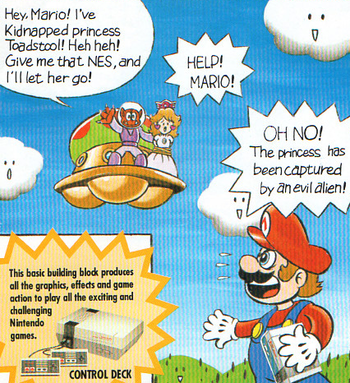 Merchandise-Driven shows need to have toy commercials. Otherwise they wouldn't be able to sell toys to the kids. But the toy manufacturers need to know what the characters look like, as well as the very basic premise, months in advance, so they can create the toys and have them on the shelves by the time kids see the series. The problem is that the plotline probably wasn't included.

Between constant rewrites and the meddling executives, a change in the story is made after the toy is. Or, alternatively, the franchise is a Long Runner and the manufactures know perfectly well what the plotline is, but end up changing around or fudging details to justify their toy line.

The changes could range all the way from a small but easily made mistake based on "Common Knowledge", to something that would reach Fandom-Enraging Misconception among the dedicated fanbase. But the advertiser(s) didn't notice or didn't care, or they don't think the kids will. Particularly strange examples may even lead to Memetic Mutation among the fandom.

Note that this trope is not exclusive to toy commercials only — it could be ads for a movie, or a Hostess Twinkie. All that matters is that it takes an established property and changes it around to better shill its products.

This will probably involve Fan Myopia, but please try to make it understandable to even non-fans.