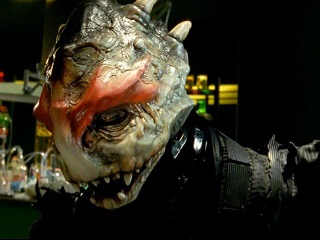 Mesogog. Awesome to some, scary to others.
Advertisement:

Power Rangers is normally the poster child for Never Say "Die", but it has had a few creepifying moments over the years.

Remember, this page is for describing general sources of Nightmare Fuel. Troper Tales-like nattery examples are a no-go here (see the disclaimer below).

In order for Nightmare Fuel tabs to survive, a new writing style is going to be used, nicknamed Example Lobotomy. Basic rules: just list facts as they are, don't just say "character X" or "the X scene" (such zero context examples will be Zapped!), spoiler policy to be determined on a case-by-case basis, italics to be applied to works' names only and not to give emphasis on what tropers say. "X scared me" is already implied by the mere addition of that example by the troper.

Titles with their own pages:

Ernie: Hey you two, what do you think you're doing? You guys can't bring this nightmare fuel in here!