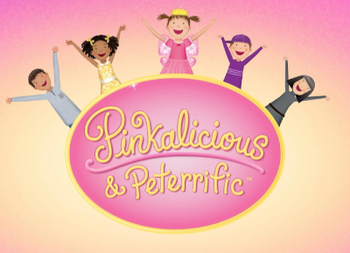 Pinkalicious & Peterrific is a PBS Kids series that serves as an Animated Adaptation of the Pinkalicious books by Victoria Kann. Dorothea Gillim is an executive producer for the show, and the show is produced by WGBH Boston.

The show follows Pinkalicious Pinkerton, a Girly Girl with a love for all things pink, and her little brother Peter. Pinkalicious is an artist at heart who sees the world in a different way, finding creative inspiration everywhere she looks. She knows what she likes and she’s not afraid to express herself, though sometimes she needs help from her brother, Peter, and their neighborhood friends including Jasmine, Rafael, and the Perky Goth Kendra.

Focusing all disciplines of the arts (including dance, theater, music, the visual arts, creative writing, media, culinary arts, here is what Pinkalicious & Peterrific aims to do:

The show premiered on TV on February 19, 2018. PBS Kids announced

that before the show premieres, they will be releasing full 11-minute episodes of the show on their video app every Friday until February 9. PBS did a similar thing back in January 2016 with Ready Jet Go!, where they released several episodes online before the show's official premiere in February 2016. A sneak peek of Pinkalicious & Peterrific aired after the premiere of the Odd Squad TV movie World Turned Odd on January 15, 2018.