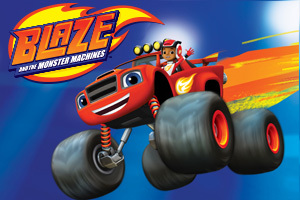 To go at super speed, say "Let's Blaze."
Blaze and the Monster Machines is an Edutainment CGI animated series by Nickelodeon created for its Nick Jr. section, with a focus on teaching the concepts of STEM (Science, Technology, Engineering and Mathematics). The show focuses on Blaze, an orange/red monster truck, and his young but smart driver, AJ. They live in a world that involves many living monster trucks, including their truck friends Starla, Stripes, Zeg, Darington and Watts. Another friend of theirs is a girl named Gabby, who is a mechanic who can fix anything. Each episode also features Crusher, a sneaky blue truck who cheats in races. Crusher is almost always accompanied by a nice green car named Pickle; the two frequently star in their own seperate subplots as of Season 2. Crusher slowly evolves into a nicer character as the series goes, cheating less and less.
Advertisement:

The series was created in 2014, being exhibited by Nick since their first season, going two seasons of 20 episodes per season and a third aired in 2017 and later on a fourth in 2018. Also, since 2016, the complete season one is available on Netflix. The official website is here

, as well has its own article

in The Other Wiki. Also this show has its own wiki

. It also got its own YouTube channel in January 2020.

Example of:
Pet the Dog