Just For Fun / Horsin' Around 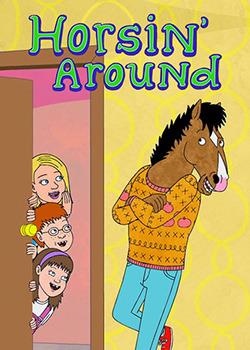 I've heard of hit sitcoms, but this is ridiculous!
"Three little orphans - one, two, three.
Without a home or a family tree.
Until this horse said, 'Live with me,'
And now they've got a new family!"
— The theme song
Advertisement:

Horsin' Around is a Sitcom created by Herb Kazzaz and starring BoJack Horseman, Joelle Clarke, Bradley Hitler-Smith, and Sarah Lynn. It ran from 1987 to 1996.

The premise was simple: Horse (played by BoJack Horseman) decides to adopt three orphans, Olivia (Joelle Clarke), Ethan (Bradley Hitler-Smith), and Sabrina (Sarah Lynn) and has to balance being a father with his job and his love life. Olivia was the sensible oldest daughter, Ethan was the nerdy middle son, and Sabrina was the adorable youngest daughter. Rounding out the cast was Goober, the obnoxious neighbor and potential love interest for Olivia.

Despite its commercial success, the show was never popular with critics, who thought it was an unintelligent, overly-saccharine Cliché Storm. Nonetheless, it was universally praised by audiences (and lasted nine seasons) and is overall remembered fondly by fans, particularly those who grew up in The '90s.

The show is also widely cited as Sarah Lynn's first serious acting role, and the one that first launched her into the stardom she would later accumulate in her teens.

BoJack Horseman and Bradley Hitler-Smith would later try to create a Sequel Series titled Ethan Around, but Horseman allegedly walked off the project during the production of the pilot and never picked it back up.

As of 2020, allegations against BoJack Horseman that include grooming young women and the unintentional assist in Sarah Lynn's overdose have put a damper on the show's reputation, and the show is not as widely praised as it once was by those who used to watch it. A heavily edited version of the show — titled "Around" — is set to be released, which will be roughly 8 minutes in length and center on the child characters living alone without any adult supervision.

Horsin' Around provides examples of