Literature / Far from the Madding Crowd 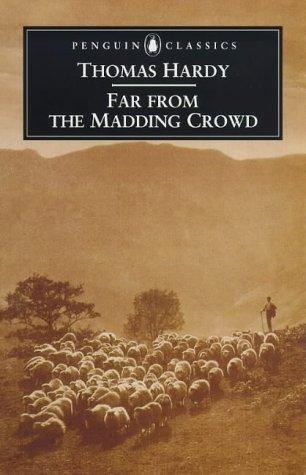 Thomas Hardy's first big literary success, Far from the Madding Crowd (1874) is the story of the honest young shepherd Gabriel Oak and the object of his affection Bathsheba Everdene in the quiet fictional English countryside of Wessex. Bathsheba and Gabriel first meet when she is a poor woman staying with her aunt. Astounded by her beauty, Gabriel proposes to her but Bathsheba, not impressed with Gabriel's humble existence and wishing to remain an independent woman, rejects him.

The two do not meet again until Gabriel, by several cruel twists of fate, ends up in her employ. She has recently inherited a very large farm and has become quite wealthy. Gabriel will watch Bathsheba reject countless suitors all while serving her faithfully as a farmer and friend.

The novel deals with the value of independence versus marriage as well as the passage of time. Bathsheba recognizes that marriage is unfair to women and is averse to the very concept of being possessed by another man, especially considering she barely knows the men who can't help but fall in love with her. Gabriel's ancient, oversized pocket watch is one of the first things described. The watch counts the minutes accurately but the hour hand is broken and always displays the wrong hour. Time is said to move slower in the country, where decades and generations past are thought of as the present while a mere five years ago in the city is considered ancient history. Though at least six or seven years pass between when Gabriel first proposed and when Bathsheba accepted his hand, patient, country-born Gabriel is in no great hurry. Her relationships with the feckless Sergeant Troy and eminently respectable landowner Boldwood are merely false strikes of the hour.