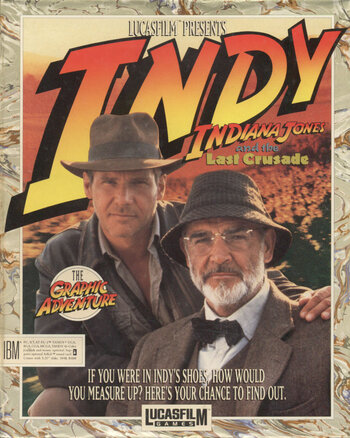 Two video games by LucasArts released in 1989, based on the popular Indiana Jones and the Last Crusade movie.

The first (and the most well known) is an Adventure Game with painted cinematic screen-by-screen backgrounds, while the second, subtitled "the action game", is a standard Platform Game. Another console game with the same name was released years later; these two are mostly forgotten today.

The plot closely follows, and expands upon , the film of the same name. As the game begins, Indiana Jones has returned to his college, after reclaiming the Cross of Coronado. He is approached by businessman Walter Donovan, who tells him about the Holy Grail, and of the disappearance of Indy's father.

Indy then travels to some of the places seen in the movie, such as Venice and the catacombs, after meeting fellow archeologist Elsa Schneider. In the process he finds his father held captive in the Brunwald Castle, after passing through the mazelike corridors, fighting and avoiding guards. Then Elsa's double role is revealed when she steals the Grail Diary from Indy. After escaping, father and son pass through Berlin to reclaim the Diary and have a brief meeting with Hitler. Then they reach an airport, from where they intend to seek the Valley of the Crescent Moon, by Zeppelin or biplane.

Several key elements of the film were not included while many other are revisited and done different. In keeping with Indiana's action-man persona, the game also features pure action scenes. Unlike most LucasFilm adventures, you can die.

Two PC versions of the game were released, one with 16 color EGA graphics, and one with 256 color VGA graphics.

In 2009 the game was re-released on the PC, directly downloadable through Steam.

Tropes featured in this adventure game include: