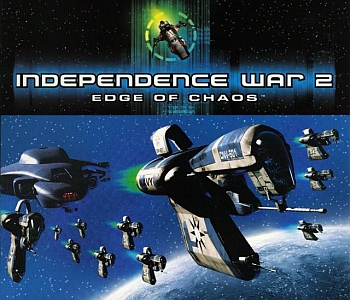 "Here, on the very rim of known space— justice is a long way away..."
— Cal
Advertisement:

Independence War 2: Edge of Chaos is a space combat simulator, and the sequel to the original Independence War (1997). Developed by Particle Systems, Ltd. and published by Infogrames, the game was released to critical acclaim in 2001. Unfortunately, it was not a financial success.

The game's plot concerns prepubescent Cal Johnson, who lives in the remote Badlands Cluster, and whose father is fatally indebted to ruthless industrialist Caleb Maas. After Cal's father is murdered, the boy falls into the care of Jefferson Clay (an AI echo of a centuries-dead Navy captain). Unfortunately, his juvenile attempts at piracy soon result in him being thrown in prison for fifteen years. By the time Cal escapes, Maas has risen to a position of supreme corporate power, and unpleasant things are happening around the Badlands cluster, mainly rampant Marauder attacks...

While the original I-War was a relatively straightforward military campaign, Edge of Chaos put its emphasis on training and exploration, incorporating an enormous sandbox world. Gameplay revolves around combat, piracy and trade. Like its predecessor, the game is especially notable for featuring realistic Newtonian physics.