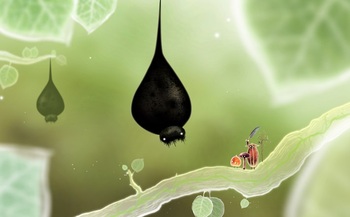 The group encounters a bat.
Botanicula is a Point-and-Click Game by the developers of Machinarium, Amanita Design. It is the first of their games not designed by founder Jakub Dvorský but by the animator newcomer Jaromír Plachý, something that is evidenced by the amount of animation in its every frame. The story follows a Five-Man Band of forest creatures who embark on a quest. Along the way, they have to evade multiple adversaries, notably a Giant Spider that sucks the life out of anything it touches.
Advertisement:

The game is done in a similar whimsical style to Machinarium, although it can turn surprisingly dark at times. It won the Excellence in Audio award at IGF 2012 for its energetic soundtrack by the Czech band DVA. Additionally, a new Humble Indie Bundle was created for its debut, which gave part of its proceeds to the World Land Trust.