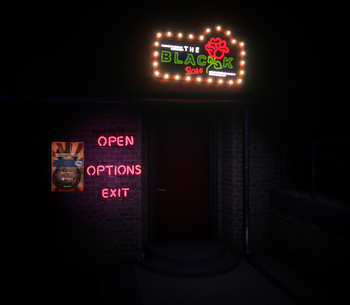 Once you go through that door, you'll never leave.
The Black Rose is a short freeware horror game made in Unity by a group of students at a Swedish game design school Futuregames, with the final version released

on July 13th, 2019. Due to its short size, even example names can reveal significant plot details, so be wary of spoilers.
Advertisement:

The player takes on the role of an unnamed character who becomes infatuated with a woman at a party, who suddenly walks away and leaves only a letter inviting him to the titular diner. Once inside, however, he quickly finds the diner essentially empty, yet is unable to leave through the front door. Going to the fire exit, however, returns him where he started, but with progressively degrading changes, much like the corridor in the "Playable Teaser" of the cancelled Silent Hills.

Not to be confused with an earlier freeware 3D horror game, Black Rose. It is also unrelated to the 1992 pinball machine and a steampunk webcomic of the same name.