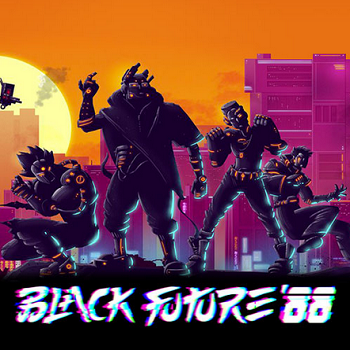 Black Future '88 is a Roguelike Run-and-Gun game that was developed by SUPERSCARYSNAKES, published by Good Shepherd and released for PC through Steam and on Nintendo Switch on November 21st, 2019. It is very fast and can be played alone or in co-op.
Advertisement:

It is set in a particularly dark Cyberpunk world where a crazed billionaire named Duncan has begun a nuclear bombardment of the Earth in 1988, which hasn't stopped since, to the point none of the survivors are even sure how much time has passed, and prefer to think it's still 1988 out of convenience. Now, you control one of the 5 available characters and must scale an ever-evolving tower of Skymelt, whose floors are full of guards and drones in order to finally put an end to Duncan's carnage.