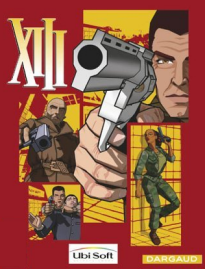 You wake up on a deserted beach. You have no memory, no identification, and a pounding headache. Your only clues to who you are and why you're there are a blurry flashback, a safety deposit key, and the number XIII tattooed on your neck.

Within about two minutes, your lifeguard rescuer is shot to pieces. You discover an incredible proficiency with weapons and, after wiping out about a dozen Mooks, proceed to go about discovering who you are. Unfortunately, as you appear to be a long-dead Army Ranger with a history of heinous crimes and a wife who is a secret spy and who may have betrayed you, fighting for the side of good is no easy task. Especially not with multiple armies of baddies chasing you every step of the way.

This 2003 game, developed and published by Ubisoft, is notable largely for its atmospheric Cel Shading - XIII was originally a Belgian comic book (by writer Jean Van Hamme and artist William Vance), running from 1984 onwards. It keeps the bande dessinée style — cutscenes are often divided into "panels", footsteps make visible "tap tap tap"s on the screen, people plummeting off cliffs leave a long "AAAAAAAH!" trailing behind them, and devastating combat gets alternate camera angles through inset panels. Also in general a tightly-plotted game, though a bit goofy at times.

The game was also reimagined in 2011 as XIII: Lost Identity, a mobile adaptation that (largely) skipped the gunfights and was done as a Point-and-Click Game instead.

A remake with modernized graphics and slightly tweaked gameplay (such as modern aim-down-sights, a simplified armor system, and a limit on the amount of guns you can carry), but the same levels and campaign, developed by Maltese studio PlayMagic and published by Microids, was announced

, complete with a gameplay trailer

, and later released on November 10, 2020, coinciding with the month the original was released in.

No relation to Final Fantasy XIII and its sequels, or the XIII Century Real-Time Strategy games.

open/close all folders
XIII
The remake