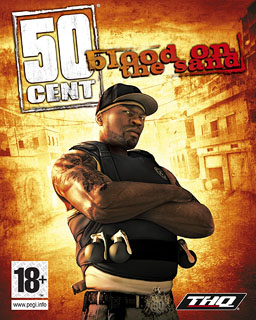 50 Cent: Blood on the Sand is a 2009 Third-Person Shooter developed by Swordfish Studios, published by THQ, and featuring rapper 50 Cent As Himself in the main role. It is a sequel to Vivendi Universal Games' 2005 title 50 Cent: Bulletproof.

The game begins with 50 Cent and G-Unit finishing a concert in an unnamed, war-torn Middle Eastern country, only for the promoter to claim he can't pay the promised $10 million fee due to an alleged robbery. After 50 Cent points a gun to the promoter's head, the latter offers 50 a priceless diamond encrusted skull as collateral while he tries to recover the money. 50 accepts only for the skull to be stolen as soon as he walks out the door by a paramilitary group connected to a local warlord. The rest of the game involves 50 and a selected G-Unit partner slaughtering their way through the Middle East to recover the skull.

The game itself is a fairly linear third person shooter with a Gears of War-style cover mechanic. However, the game also has a points-based mechanic similar to that of The Club (no relation to 50's song "In Da Club") in which you gain points by killing enemies, with bonus points offered by fulfilling special timed objectives given to you in several points (usually involving killing specific enemies, or killing them in a specific way) or increasing the value of regular kills by... swearing at your victims. Via the dedicated swear button. These points may then be used in the game's shop where you can buy and upgrade weapons... as well as upgraded swears.