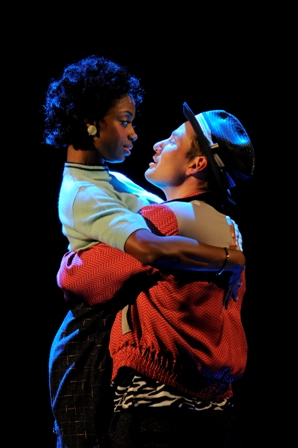 Memphis is a 2009 musical focusing on the story of Memphis disc jockey Huey Calhoun and his love of "black music" in a segregated 1950's America. One night, after entering Delray's, an African-American underground rock n' roll bar, Huey strikes up an interesting relationship with the bar's singer, Felicia Farrell. They flirt and he promises to see her put on the radio one day. However, she is the sister of Delray, the owner of the bar.

Despite Huey's statement that he "never was taught to read none" and had never learned to write, he appears to be quite intuitive. At his job as a stock boy at a local mall, he strikes a deal with the owner and soon sells many albums in a matter of minutes. He is, however, fired for the African-American music he played in the store. He then proceeds to apply to many local, white radio stations. When Felicia learns this, she immediately forks out to make her own record for him to play on air. When she goes to show Huey, his mother breaks it, still set in racist ways.

Huey gets a job at a local station, impressing the owner by bringing both white and black teens closer together through their liking of the music he plays. Huey ends his first broadcast with "hockadoo" as a cry of triumph, yet not completely sure where he has gotten it from. It soon becomes his Catchphrase. He later gets Felicia to sing live in the station as a way of saying sorry for what his mother did to her record, and both her and Huey's popularity begins to grow.