You may be looking for HOME, a 2013 Fan Sequel to OFF, by Felix The Judge. 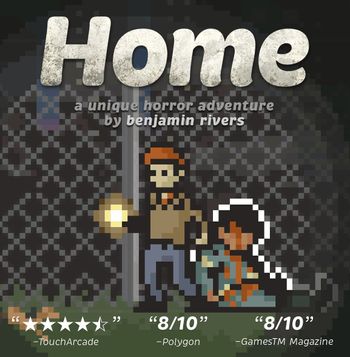 Home is a 2012 Indie horror adventure game developed by Benjamin Rivers, released in 2012. The player takes the role of an unnamed young man who wakes up in the house of a complete stranger, soon discovering a seemingly murdered body and other disturbing things. He must make his way through a handful of different environments, including the forest, an abandoned factory, and a closed general store, in order to make his way back to his home.
Advertisement:

The game takes place from a sideways two-dimensional perspective and has the player examining objects in the environment and using some of them to progress. However, it is not a traditional adventure game in the Sierra Entertainment or LucasArts model, as the emphasis is much more on exploration and atmosphere rather than object puzzles. The game also features Story Branching elements in that the game is told as a flashback by the main character, and at many points in the game, the player is asked what happened next or whether or not something is part of the main character's history (and allowed to choose from one of two options).

In terms of presentation, it strongly resembles Lone Survivor, except it's a pure horror game without any survival mechanics or combat, nor any explicitly supernatural content.

, but beware of spoilers.

Tropes appearing in Home include: