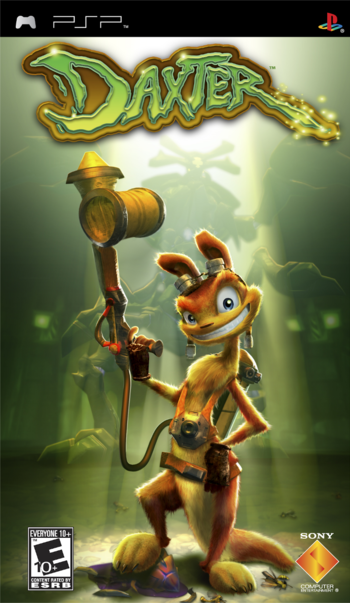 Half otter. Half weasel. All trouble.
"Alright! Everything with more than two legs start trembling!"
Daxter
Advertisement:

Daxter is an Interquel to both Jak and Daxter: The Precursor Legacy and Jak II. Released for the PlayStation Portable in 2006, this game puts players in the shoes of Jak's cowardly sidekick, Daxter. But who said Ottsels couldn't kick butt?

After traveling through an ancient Precursor doorway, Jak and his friends find themselves in a bleak, unfamiliar city. There, he is captured and held hostage by the Krimzon Guard, led by the atrocious Baron Praxis. It's too bad the dictator overlooked a small detail...

Two years after witnessing Jak's capture and narrowly escaping, the little orange ottsel takes a position at a local bug extermination firm in hopes of getting closer to reuniting with his pal. Of course, his fumigation tenure at Kridder Ridder comes with a few hurdles...