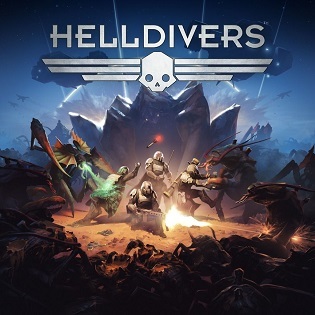 Helldivers is a top down shooter game developed by Arrowhead Game Studios, the creators of Magicka. In Helldivers, the players need to learn to coordinate their actions during chaotic combat game play, to succeed in combat and to avoid friendly fire casualties.

The dystopian universe of Helldivers has mankind ruled by a managed democracy where the outcome of elections are more predictable. The improved democracy has become more than a way of electing a government, it has become a creed which the brainwashed inhabitants fight for - without fully acknowledging what it means. The capital of this new society, Super Earth, is beset on all sides by three hostile enemy races that, according to the government, need to be exterminated if humanities "peaceful" democracy could ever hope to prosper.

The Helldivers, a galactic combat unit, must fight three different enemy species to ensure the survival of Super Earth. The gameplay takes place on one of several procedurally-generated open missions where players must accomplish a series of objectives. Before missions the players select from a wide variety of weapons, perks and stratagems to accomplish their objectives. The game's most unique feature is, much like Magicka, the fact that friendly fire cannot be turned off, meaning it's incredibly easy to die by your own teammates hands if you fail to cooperate with them. The game also has a macrogame known as the "War Front", where all players cooperate to assist with the eradication of the three alien species, in doing so obtaining powerful bonuses and rewards. The game was released for the PlayStation 3, PlayStation 4 and PlayStation Vita. A version for Microsoft Windows was released via Steam on December 7, 2015.

Our utopian nation at Super Earth provides samples of: