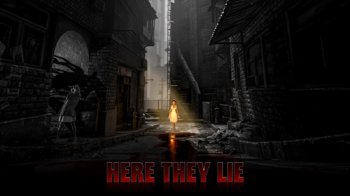 Here they lie is a launch title horror game for the Playstation V.R. made by a team called "Tangentlemen" in 2016. The story... is difficult to pin down. Gameplay is minimal. Most of it revolves around walking around and collecting photographs, each of which comes with a speech by different people on their views on life. What separates this from other Walking Simulator games like Dear Esther and Firewatch is that there are enemies that can kill you, so there is a stealth element to the game.

The game has you take the role of "Buddy" who just had a discussion (maybe) with his ex-girlfriend, Dana, about the possibility of getting back together, but instead of staying behind to work things out with her, he gets on a train. From then on, he goes on a bizarre journey in a mostly monochrome world with disturbing animal people who don't talk, and the ever-present threat from a burning business man. Over the course of the game, you hear the philosophies and memories of various people, though none of them seem to truly connect to the story. The real story has to be gleaned from the various symbolic events, such as the man whom you free from prison, only for him to lock himself back in and beg to be released again.