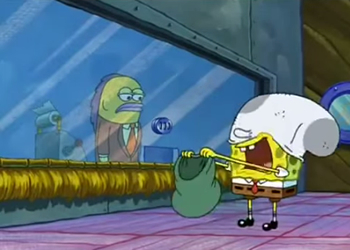 PUT THE MONEY! IN! THE! BAG! PUT IT IN!
"Son, you got a panty on your head."
— Raising Arizona
Advertisement:

You probably want to disguise your face before, say, robbing a bank, to avoid getting caught. But you totally forgot to include that in your bank-robbing plan! You want something better than a Paper-Thin Disguise, but you can't get professional realistic masks. Time for the Stocking Mask.

This trope is Truth in Television, as:

However, a stocking mask also has disadvantages, such as making the wearer's vision go fuzzy (of course you can cut out holes to reveal your eyes, but that would just complicate things), and very thin stockings can't cover your scars and such. And needless to say, it only covers your face. Also, due to its popularity, anyone wearing one of these in the street will be considered a Blatant Burglar.

Expect a Minion with an F in Evil to bring pantyhose instead.

Spongebob and Patrick rob a bank.<br><br>"PUT IT IN THE BAG! PUT IT IN!"

Spongebob and Patrick rob a bank.<br><br>"PUT IT IN THE BAG! PUT IT IN!"