Video Game / Tcheco in the Castle of Lucio 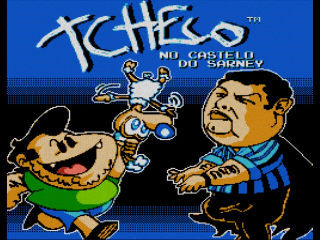 "Hey boys and girrrrrl, Shh, It'sa me, Tcheco."
— Tcheco in the English trailer

Tcheco in the Castle of Lucio

series of cartoons by Marcelo Barbosa before being ported to other platforms years later. The adventurous Tcheco must overcome bizarre platforming challenges in order to collect all the keys on each exciting screen and open the door to the next, making his way through a total of 65 shocking levels.

Prior to the game's creation, there were Tcheco-themed ROM hacks of Rockin Kats and Kero Kero Keroppi no Daibouken 2: Donuts Ike ha Oosawagi!, with a Panic Restaurant hack that was unreleased to the public.

He's good. We are all good. Let's make love.

Troping is our art! Come on, my little friends!: