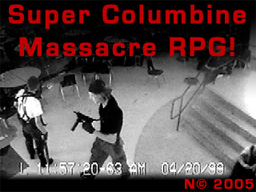 Super Columbine Massacre RPG! (SCMRPG!) is a freeware RPG created by independent filmmaker Danny Ledonne using RPG Maker 2000. It was released on April 20, 2005, the sixth anniversary of the Columbine High School massacre — which is the main topic of the game.

The first half of the game is basically a reenactment of the school shooting that took America and the world by storm — Eric Harris and Dylan Klebold planning the massacre, setting up the equipment needed, arriving at the school unnoticed, planting the bombs at the cafeteria, raining bullets on unfortunate students and faculty, and ending their own lives when the police exchanged fire with them. The second half of the game has the two boys ending up in hell, reliving their favorite game, Doom.

The game attracted controversy due to its alleged glamorization of the massacre. Many mainstream publications considered SCMRPG! to be one of the worst games of all time, and victims and their loved ones called out Ledonne for trivializing an otherwise sensitive topic. However, there were other journalists who comprehended the game's intention of making players understand what prompted Eric and Dylan to perform one of the worst school shootings in history. SCMRPG! was even disqualified from the Guerilla Gamemaker Competition of the 2007 Slamdance festival, and it took the boycotting of other competitors for the festival's organizers to come to their senses.

Ledonne would later create a documentary about his game and the controversy it spawned, Playing Columbine. He has stated that SCMRPG! would be his first and only game.