Film / Ultraman R/B The Movie: Select! The Crystal of Bond 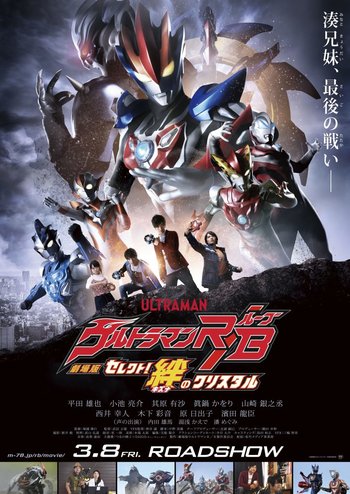 The Minato Siblings prepares for their final battle against evil... until the next battle, that is!

Ultraman R/B The Movie: Select! The Crystal of Bond is a 2019 tokatsu film produced by Tsuburaya, the Big Damn Movie of Ultraman R/B concluding the series' events. It's also the final Ultraman movie to premiere in the Heisei era.

After a year of peace in Ayaka City since the final episode of Ultraman R/B, the Minato siblings - Katsumi, Isami, Asahi are pursuing their dream careers, when Katsumi decides to pay a visit to his old friend, Toi, whom inspired Katsumi back in their elementary school days and was last seen deciding to become a game developer. To Katsumi's disgust, Toi had since become a withdrawn recluse whom had given up on his life, and simply refused to even spend time with his old friend.

When Riku and Pega (from Ultraman Geed) gets accidentally pulled into the dimension of Ultraman R/B and meets the Minato siblings, they learnt from Riku of a new threat, a fallen warrior called Ultraman Tregear, who can bring out the darkness and most sinister desires in people. Unfortunately, Tregear's first victim in their universe is none other than Toi, who desperately wants to prove his superiority by bringing his designed monster, Snake Darkness, to life.

Ultraman R/B the Movie: Select! The Crystal of Bond provides examples of the following tropes: