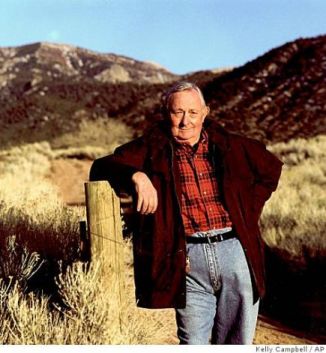 Anthony Grove Hillerman (May 27, 1925 – October 26, 2008) was an award-winning bestselling author of detective novels and non-fiction. He is best known for Leaphorn & Chee, his much-loved Police Procedural series about Navajo Tribal Policemen Joe Leaphorn and Jim Chee, set primarily on the Navajo Reservation in the Four Corners area of the Southwest.

Hillerman was a decorated World War II veteran who also worked as a crime reporter. He had grown up among Native Americans in Oklahoma and identified with them as fellow country folk. He has also acknowledged creative debt to the mystery novels of British-born Australian author Arthur W. Upfield, who wrote about a half-white, half-Aborigine detective named Bony, who worked with a deep understanding of tribal traditions.

The novels of Tony Hillerman provide examples of: