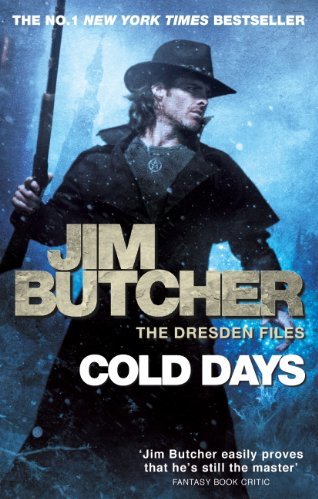 The One With… all the Fae and Outsiders.

"Mab, the Queen of Air and Darkness, has unique ideas on physical therapy."

Cold Days is book #14 in The Dresden Files.

After the events of Changes and Ghost Story, Harry Dresden is now the Winter Knight, assassin and thug of the Winter Court, specifically Mab. But due to his attempts to dodge his responsibilities, he was only a heartbeat away from death for a few months, so he is feeble and confined to bed. Once he is lucid enough to remember his own name, Mab starts his physical therapy.

The Winter Court is very big on the idea of pain as a motivator.

After months of surviving daily and increasingly bizarre assassination attempts by Mab as part of his therapy, the Queen of Air and Darkness declares her new Knight ready for his first assignment. However, in the process of carrying it out, Harry quickly realizes that his life is even more complicated than he initially thought.

So, he must endure anger and suspicions of former allies and darker side of Winter Knight's power which urges him to kill and rape those around him, weaving between politics of the Winter and Summer Courts, all while learning Truths of the world which may never allow him to know a restful sleep again.