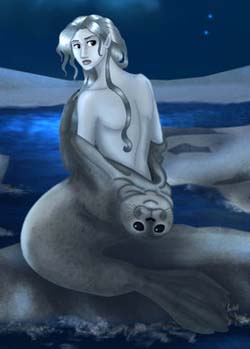 Used with permission.
"Once a Selkie finds its skin again, neither chains of steel nor chains of love can keep her from the sea."
—The Secret of Roan Inish
Advertisement:

Selkies (also known as silkies, selchies, and seal wives) are mythological creatures that are found in Faroese, Icelandic, Irish, and Scottish folklore. Traditional selkies can become human by taking off their sealskins and return to seal form by putting the skin back on. Stories concerning selkies are often Shapeshifting Lover romantic tragedies. Sometimes the human will not know that their lover is a selkie, and wakes to find them gone. Other times, the human will hide the selkie's skin, thus preventing them from returning to seal form. A selkie can usually only make contact with one particular human for a short amount of time — seven years, at most, and often less — before they must return to the sea.

In modern Speculative Fiction, the depiction of seal and sea lion shapeshifters varies. Some are called Selkies and correspond in varying degrees to traditional folklore. Others might be called wereseals. Sometimes seal shapeshifters incorporate features inspired by werebeast, sea witch, and werewolf lore. On rare occasions, the name Selkie will be applied to something other than a seal-shifter, however, it is still normally used for something water-related.

For more information, see The Other Wiki Selkie article.

May overlap with Sweet Seal. Related tropes include Our Mermaids Are Different, Our Werebeasts Are Different, Animorphism, and Water Is Womanly. See also Unscaled Merfolk.

Not to be confused with the Webcomic Selkie, or one of the races of the Final Fantasy subseries Crystal Chronicles. Or with selfies.

Fans of the selkie legend can probably guess the selkidomus will be some kind of seal creature. (Though this one seems to be combined with a giant monster rather than a humanoid.)

Fans of the selkie legend can probably guess the selkidomus will be some kind of seal creature. (Though this one seems to be combined with a giant monster rather than a humanoid.)